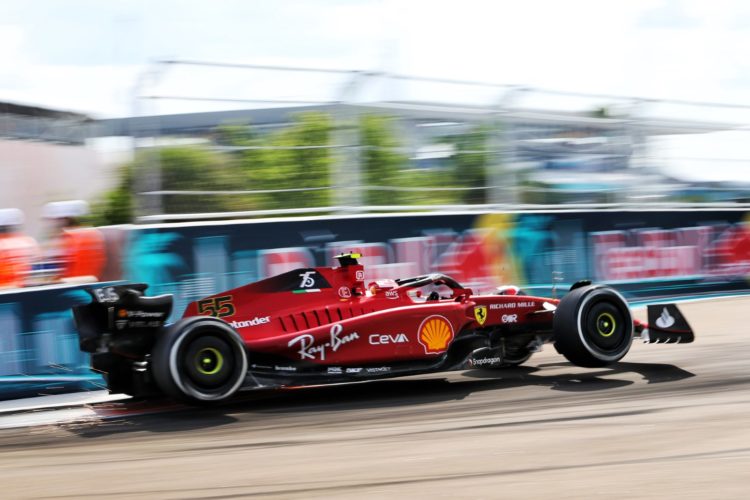 Carlos Sainz described his Miami Grand Prix podium as a confidence-boosting result after a spate of setbacks at recent events.

Sainz suffered early exits in Australia and Emilia Romagna but bounced back by scoring third position at Formula 1’s inaugural race in Miami.

It marked his first race finish since the Saudi Arabian Grand Prix back in late March.

“It’s not so much a relief – but it’s needed,” he said. “I think I needed to complete a race distance, to get the body back to shape, and also get the feel for the car on used tyres, high fuel.

“I was still doing a couple of mistakes out there during the race, just because I was trying the car and trying myself out there.

“The important thing is that we got a full race in, but at some stages of the race I was pretty quick and also the battles and the feeling with the car in battle with Checo [Perez], you know what to do with the battery, with the tyres, I think it gave me a good understanding of what to do in the future.”

Sainz had to repel a bold move from Perez during the closing laps as the Mexican strived to make use of his tyre advantage.

“Getting out of the last corner at the Safety Car, you saw me nearly spinning a couple of times so it was tough but I think we did a very good job managing the battery and the places where he was having a chance to overtake,” said Sainz.

“Actually, he threw a launch into Turn 1 which we managed to counteract. Tough, tough.

“I honestly expected that he was going to pass us because the tyre advantage was too big you keep trying and keep putting yourself in the fight and in the end we got the podium which was a good result to build on after the last few races and gives me confidence going to Spain.”