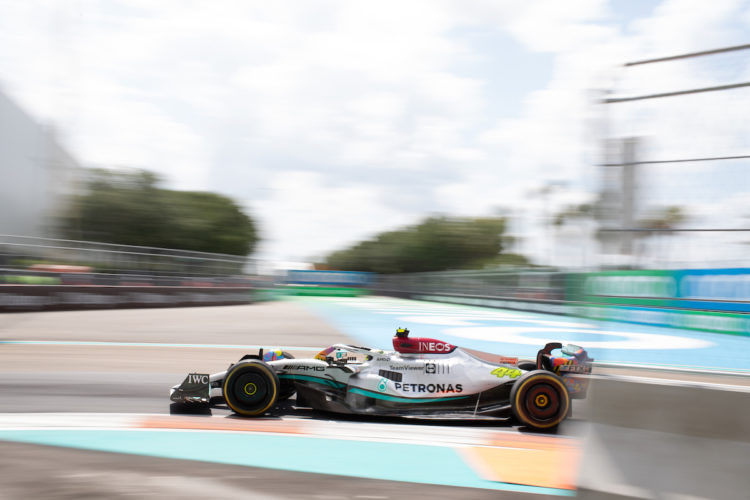 Toto Wolff says he remains confident that Mercedes is in possession of a fast race car despite its struggles at the start of the 2022 Formula 1 season.

Mercedes ended the Miami Grand Prix on Sunday in fifth and sixth place, as it was notably the third-fastest team in the field.

The reigning Constructors’ Champions have struggled with his challenger at the opening rounds this year, as it has suffered from severe bouncing on the straights.

Having scored just two podiums in the opening five races of the campaign, Wolff is sure that the W13 car has potential, with the team’s understanding of how to extract it being the only factor holding it back.

“We’ve been straight from the beginning, flying in the fog a little bit,” Wolff said.

“It’s clear there’s potential in the car and she’s fast, but we just don’t understand how to unlock the potential.

“It’s a car that is super difficult to drive and on the edge, dipping in and out of the performance window – more out than in.

“And discussing the data with a scalpel is just a painful process because it takes very long.”

Wolff added that the team is also dealing with a peculiar issue in that the negative feedback that the drivers are giving the team doesn’t necessarily show up on data.

“As a matter of fact, the data sometimes doesn’t show what the drivers tell us,” he said.

“Certainly they have their hands full with a car that is just not at all comfortable, nice or predictable to drive. But the data doesn’t show any of these big swings.

“We haven’t had this situation before in any of the years, that it just didn’t correlate on the screens what the driver feels and that is just making it even more difficult.”