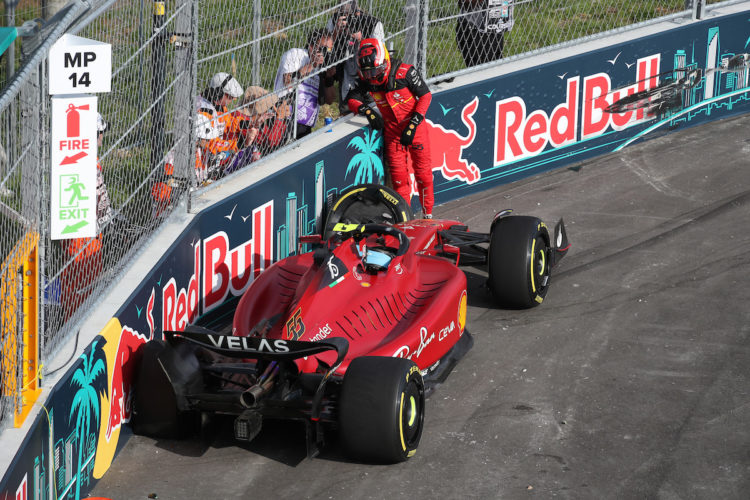 Carlos Sainz says that he was unable to push at 100 per cent capacity during the Miami Grand Prix due to soreness he picked up following his crash in Miami on Friday.

Sainz’s practice day ended early after he lost control of his car and collided with the barrier on the run to Turn 14 – the same corner where Alpine’s Esteban Ocon would crash the following day.

Drivers were critical that there wasn’t a Tecpro barrier added to the section, with the drivers contending with forces produced from striking the concrete wall.

Sainz says that his neck was still painful following the incident, which prevented him from pushing as hard as he could during certain sections of the race.

“The balance was tricky because we couldn’t keep up with Max and the Red Bull,” Sainz said.

“From my side it was more not feeling 100 per cent physically towards the end of the Medium stint.

“Already, the last five laps I started to feel a bit tired on the neck and I couldn’t push 100 per cent coming from the crash on Friday.

“I will not use it as an excuse, it’s just a matter of maybe lacking the last two races to get the neck and the body used to these F1 cars.

“Obviously, I have been a month without doing a full race distance and probably that combined with the crash on Friday just made me not being able to push 100 per cent up until the Safety Car more or less from the Medium stint.”

Sainz crossed the line in third place, taking his third podium of the year for Ferrari.

He came under pressure late on from Sergio Perez, who pitted under the Safety Car for a fresh set of tyres, but Sainz managed to keep the Mexican behind, surviving a failed overtake attempt by the Red Bull driver.