Hamilton was a ‘sitting duck’ in Russell battle 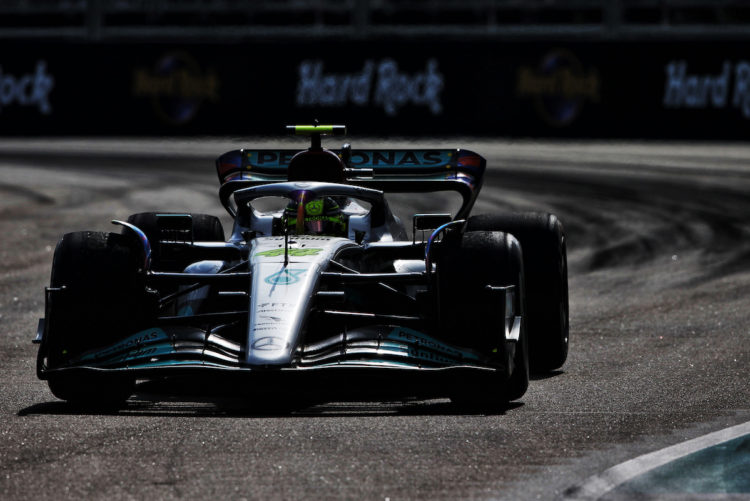 Lewis Hamilton says he was a “sitting duck” in his battle with team-mate George Russell at the Miami Grand Prix.

Russell started the race from outside the top 10 but extended his opening stint on the Hard tyre.

By pitting under the Safety Car, Russell was able to gain an advantage and was elevated into the point-paying positions behind Hamilton.

Hamilton, who had swapped his Medium tyres for Hards earlier in the race, opted not to peel into the pit lane during the Safety Car intervention.

The Mercedes duo then battled, with Russell overtaking Hamilton by gaining an advantage off the track, forcing him to return the spot.

However, Russell soon made the position permanent, with the two moving up a position each following a mistake in front for Alfa Romeo’s Valtteri Bottas.

“George obviously did a great job in that first stint,” Hamilton said. “He was on the better tyre to start with.

“The Hard was the best tyre so hindsight, maybe we could have started on the hard tyre but again, he did a great job to recover from his position and get the points.

“So we’ve got fifth and sixth today, it’s great points for the team. George did a great job, it was fair, he had fresh tyres, so I was a bit of a sitting duck.”

Hamilton was also heard questioning Mercedes’ decision to offer him a chance to pit under the late Safety Car, requesting that the team determine the best option for him.

Explaining after the race, Hamilton said that inside the car, he has no way of knowing what advantage he would gain from entering the pit lane.

“When you’re out there, you don’t have all the information,” he said. “You don’t know where everyone is and where you don’t have the picture that they have on the screen.

“So when you’re given the responsibility to make a decision, it feels like you’re gambling and I don’t like that.

“So I was like ‘you guys make the decision’. But either way we’re just unfortunate.”