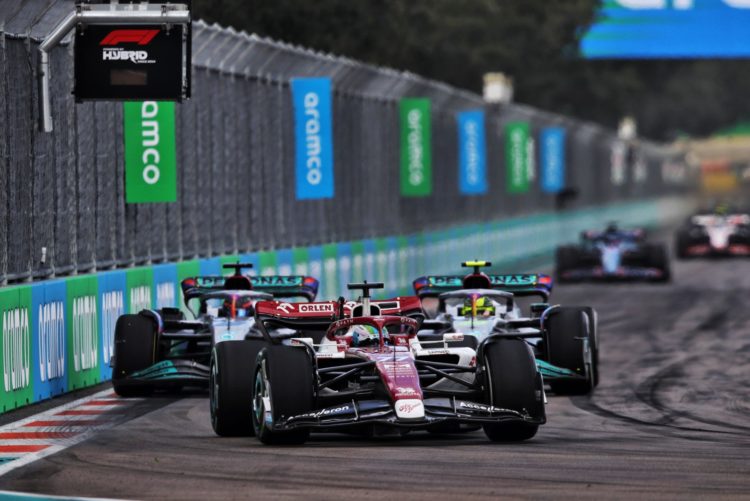 Valtteri Bottas says his chances of taking a top five in Miami became unstuck after he was distracted keeping tabs on the batting Mercedes drivers.

Bottas held a lonely fifth for much of the grand prix but the Mercedes drivers were brought into play following the safety car period.

Russell duelled with Hamilton along the back straight, ultimately making the move stick, while moments later Bottas slid wide and hit the wall at the exit of the hairpin.

Explaining the situation Bottas conceded that “as [George] was overtaking Lewis I was kind of following them in the mirrors as they were getting pretty close, [whether] I needed to close the door or something.

“I braked a fraction too late, mixed the apex in the corner a tiny bit, then I got to the dirty tarmac and felt awkward as I was going so slowly, understeering, hit the wall, luckily didn’t break anything or get a puncture.”

Bottas conceded it was “a shame” not to take a top-five result but nonetheless saw the upsides of classifying seventh.

“We bring home some good points which will be super important for the championship, and we showed we can fight on a par with everyone in the midfield,” he said.

“It’s all very close and the way we keep developing will be important to stay ahead in this fight.”