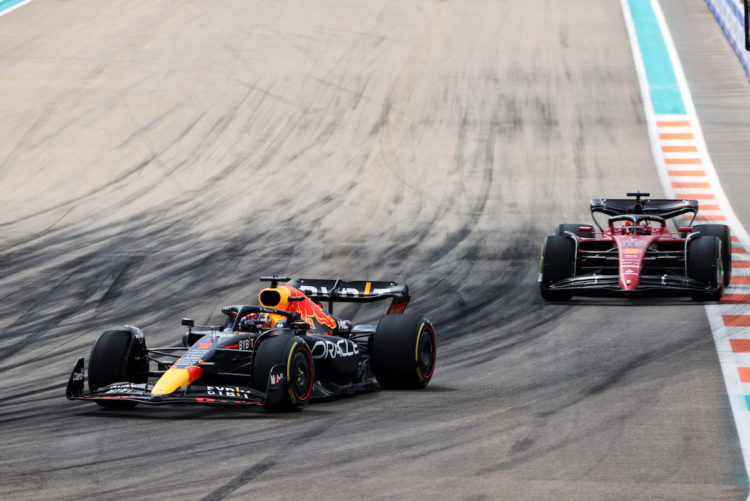 Max Verstappen fended off Charles Leclerc in the closing stages of the Miami Grand Prix to take his third Formula 1 race victory of the 2022 season.

The duo were engaged in battle following the intervention of a late Safety Car, following contact between Lando Norris and Pierre Gasly.

Leclerc hounded Verstappen for several laps, having been given the opportunity after losing the race-leading position on lap nine of the race.

However, Verstappen withstood the pressure at the head of the field to cross the line 3.7 seconds in front of Leclerc.

Carlos Sainz was third, after dropping behind Verstappen at the opening corner of the race. The Spaniard ran in the final podium spot for much of the grand prix, but the position came under threat late on by Sergio Perez.

The Mexican was the only driver equipped with fresh tyres at the Safety Car restart, but a failed attempt to overtake Sainz saw his momentum falter, forcing him to settle for fourth.

Mercedes recover to fifth and sixth

Lewis Hamilton had a difficult start to the race, dropping from sixth to eighth, but soon made his way back up the order past Fernando Alonso and Gasly.

The seven-time World Champion was one of the first in the top six to make the switch to Hard tyres, and he opted not to stop again when the Safety Car was called.

Team-mate George Russell, who started the race in 12th, extended his opening stint on the Hard tyre and pitted when the Safety Car provided an opportunity.

He then lined up behind Hamilton for the restart and following a battle between the pair, he was able to consolidate fifth in front of his team-mate.

They were also given a helping hand from Valtteri Bottas, who made a mistake shortly after the restart, dropping from fifth to seventh.

Ocon progresses from 20th to 8th

Esteban Ocon walked away from the Miami race with a positive result, having moved from the back of the grid to collecting four points at the chequered flag.

Ocon, who started on the Hard compound, extended his stint and pitted for Softs when the Safety Car was deployed.

He was classified in eighth in front of team-mate Alonso, who picked up a five-second time penalty for contact with Gasly.

Alexander Albon was 10th, securing the last point on offer for the Williams team.

Haas was denied points after it looked as though Mick Schumacher was on course for the first top 10 finish of his career.

However, in the closing stages, he made contact with Aston Martin’s Sebastian Vettel, forcing them both out of the race. Their respective team-mates in Stroll and Magnussen also came together in the final laps.