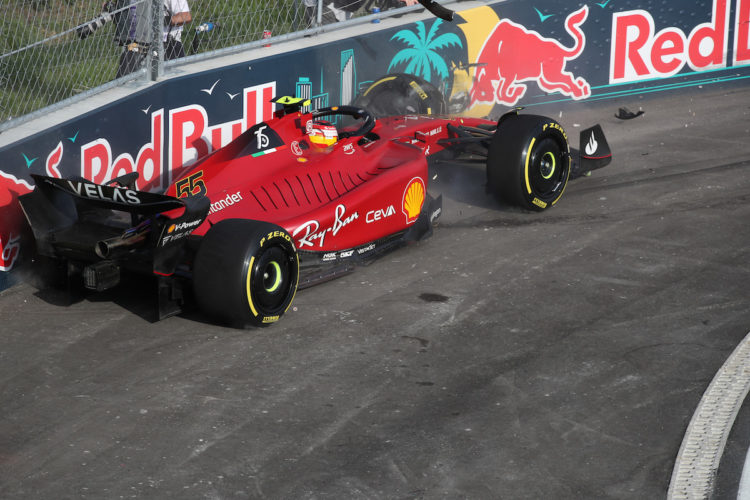 Carlos Sainz admits that there are elements of the 2022 Ferrari Formula 1 car that are “surprising” him negatively.

Sainz’s running on Friday in Miami ended early after he spun and made contact with a barrier, sustaining damage to his car.

It marks the third weekend in a row that Sainz has crashed, following incidents in Australia and Imola last month.

Having endured a difficult start to the 2022 campaign, the Spaniard has backed himself to return to form amid his current slump.

“I remember going through a very similar scenario last year where I crashed a couple of times and right after them came my best run of races in Formula 1.

“So I know how to come out of it. I think I’m still learning a lot of this car.

“This car is still surprising me, I’m not going to lie, it’s still things that are, let’s say, a bit out of my control that are surprising me.

“As soon as I get on top of them and learn them, I think as you saw today, I can be quick in any given lap.”

“The pace is still there, I’m pretty fast out there,” Sainz asserted.

“Just obviously disappointed because it’s not the way you want to start a weekend, by giving the mechanics extra [work].

“I hit the barrier probably in the worst possible place; there was no Tecpro there, I hit straight into a concrete wall which, even at the speed I was going, felt quite harsh, so the car has damage.

“I’ve given everyone a bit of a rough Friday night, which is not ideal.”