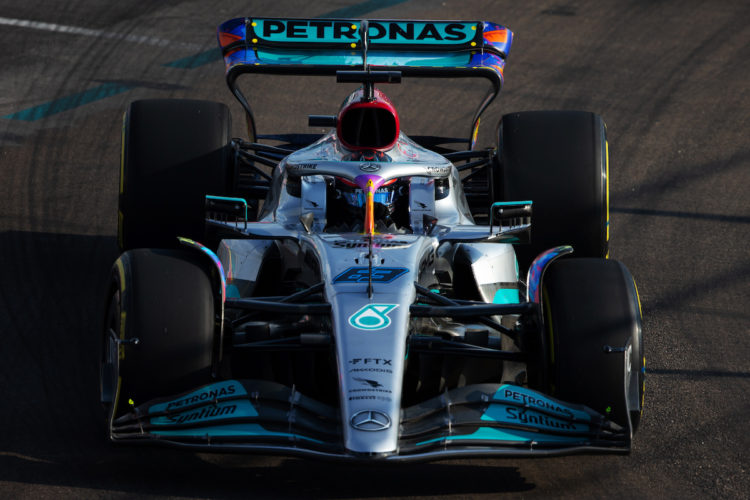 George Russell is remaining coy over Mercedes’ chances in Miami this weekend, after it displayed strong pace during Friday practice.

Russell ended the second practice session on top of the timesheet, one-tenth of a second in front of Ferrari’s Charles Leclerc.

Mercedes has endured a difficult start to the 2022 campaign, competing off the pace of front-running rivals Ferrari and Red Bull.

The team has brought upgrades to its front, rear and beam wings in Miami, but Russell has asserted that the team’s form in practice trim doesn’t mean it will be on top in qualifying and the race.

“We don’t really understand it to be honest, why we sort of hit the ground running,” Russell said.

“The car is working well, but it’s only Friday, not getting too carried away.”

Last time out in Imola, Mercedes suffered a “low” in terms of car performance, with Russell’s team-mate Lewis Hamilton failing to make it into the points.

Issues with tyre warm-up was a major factor behind its struggles, and it is why the team has had issues generating pace over one lap so far this year.

However, with conditions in Miami being quite hot, the problem has been lessened.

“We always knew ahead of this weekend that the conditions should suit us better because we have been struggling a lot with tyre warm-up even in Bahrain where the track was really rough,” Russell said.

“But this is the first real hot race of the season, so for sure that’s played a big factor.”

Mercedes’ porpoising problem was also present during free practice, with Russell affirming that it doesn’t feel any better than previous runs in the car.

However, he sees some progress being made on the team being able to perform strongly despite the bouncing.

“I think we know that it will always be there, but maybe it’s working at a lower (ride-height) range compared to where we were previously,” Russell said.

“But for sure on that high-fuel run I was feeling it and it didn’t seem to be any better, but if we can manage to do that with the car lower to the ground then obviously we seek the rewards.

“But as I said, you generally have races that go in your favour, some races that go against you – I think Imola obviously wasn’t a strong circuit for us but so far for what we see the car is working well around Miami.”