Norris: Driving off the racing line in Miami means ‘game over’ 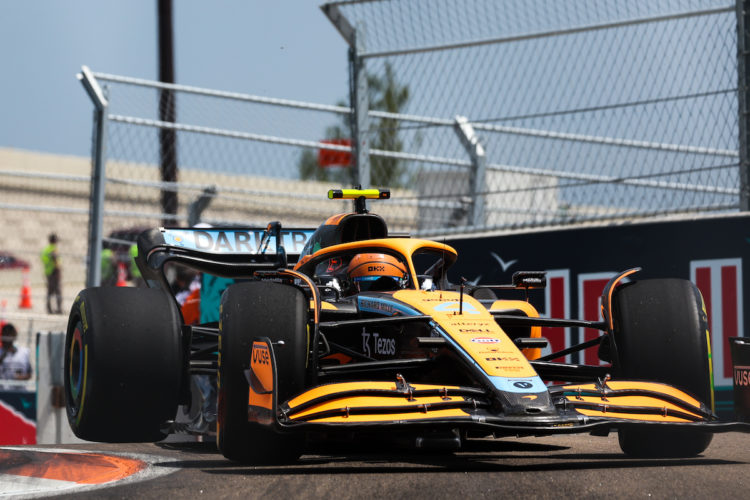 Lando Norris says it is “game over” for any driver that attempts to drive off the racing line at Miami’s Formula 1 track.

F1 cars hit the new circuit for the first time on Friday, as the sport visits the Florida city for the fifth round of the 2022 championship.

Several drivers had spins throughout the two practice sessions, with Alfa Romeo’s Valtteri Bottas and Ferrari’s Carlos Sainz making contact with the barriers during the day.

With the asphalt at the venue being so new, drivers used the practice session to lay down rubber and form a grippier surface – however off the racing line, there remains little grip for the drivers to contend with.

“The surface is very tricky as well, you go off-line anywhere and it’s pretty much game over, you spin, you end up in the wall,” Norris said.

“It’s punishing. That’s why you’ve seen a lot of people ending up in the barriers.

“It’s a bit weird. If you go off-line, it’s just terrible. I’m hoping they can do something a little bit better. I don’t know what.

“When they clean the track, it helps. There was a lot of marbles and stuff [on Friday morning] and as soon as you went off-line it was game over.”

The McLaren driver also commented on the bumpy nature of the circuit, which he admits was a surprise to him: “I think everyone was expecting it to very smooth and beautiful – but it’s not.”

Norris ended the second practice session in sixth place, and says Mercedes, who has struggled thus far in 2022, appears to be far ahead of McLaren in Miami.

“We’re not where we want to be and Mercedes are quite a long way ahead of us. They’re our most comparable team, with similar PUs.

“Mercedes have probably been one of the best cars in slow speed corners all season, just no one ever looks at the GPS very well and picks it up.

“So [it’s] not a surprise in any way. It just makes us want to work even harder and try to get past them again.