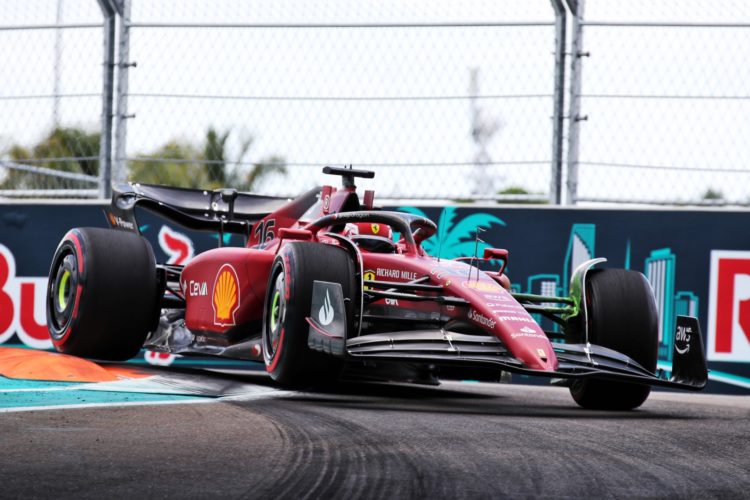 The championship leader moved to the front of the field with his last push lap, a 1:28.796s, to wind up almost two-tenths clear of Ferrari team-mate Carlos Sainz.

Leclerc previously led the way through Q1 and Q2 but Max Verstappen headed the field after the first Q3 push laps.

But his prospects of becoming the first polesitter in Miami unravelled on his last push lap.

Verstappen went wide through Turn 5, leaving him unable to deny Ferrari a perfect result, as it bounced back from its Imola disaster in style.

Valtteri Bottas responded to a difficult Friday in impressive fashion as he classified fifth for Alfa Romeo, with Lewis Hamilton sixth, as its encouraging practice pace failed to translate into qualifying.

AlphaTauri had both drivers inside the top 10, with Pierre Gasly seventh and Yuki Tsunoda ninth, split by the McLaren of Lando Norris.

Lance Stroll captured a Q3 spot for Aston Martin but was the slowest of the contenders in the session.

Fernando Alonso fell 0.032s the wrong side of the Q3 cut-off and will start from 11th place, while George Russell struggled in Q2 and was left down in 12th spot.

Russell had a scruffy first push lap, losing the rear into Turn 4, and went again on the same set of tyres but lacked confidence and dropped out in the session.

Sebastian Vettel was 13th for Aston Martin, having made a mistake at the chicane, with McLaren’s Daniel Ricciardo a disappointing 14th.

Ricciardo finished seven-tenths of a second and 11 positions behind Norris in the 15-driver Q2 segment.

It was an underwhelming day for US team Haas on home soil.

Mick Schumacher made it through to Q2, but was slowest, while Kevin Magnussen fell at the first hurdle for the first time since re-joining Haas.

Magnussen locked up into Turn 11 on his final push lap and was shuffled down the order.

It leaves the team facing an uphill task to secure its first point on home turf since 2016.

Zhou Guanyu’s prospects were undone when he encountered traffic in the final sector, a situation he reported as “dangerous” and he was down in 17th.

Williams finished at the rear of the field with Alexander Albon a tenth of a second in front of Nicholas Latifi.

Esteban Ocon did not participate in qualifying after sustaining a cracked chassis in his FP3 accident.

It means Ocon will start the race from the rear of the field.