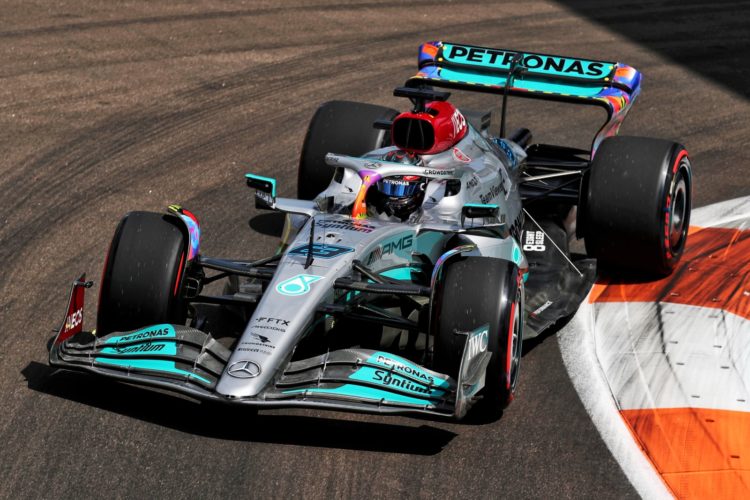 Mercedes has struggled through the early phase of 2022 with its recalcitrant W13 but brought a smattering of updates for the inaugural event in Miami as it seeks to remedy its issues.

During a hot and humid second session in Miami on Friday afternoon Russell set a time of 1:29.938s to finish 0.106s up on championship leader Charles Leclerc.

Perez spun through Turn 8 early in the session but narrowly avoided contact with the wall.

It was a difficult session for Leclerc’s team-mate and his primary title opponent.

Carlos Sainz had a clumsy accident through Turn 13 early in the session after losing control of the car on the entry to the corner.

Max Verstappen suffered a right-rear fire on his out-lap and returned to the garage, where he stayed for the remainder of the one-hour session.

Fernando Alonso was fifth for Alpine, ahead of lead McLaren driver Lando Norris, while Pierre Gasly was seventh for AlphaTauri.

Zhou Guanyu set an eye-catching lap in the sole surviving Alfa Romeo to classify eighth, a thousandth of a second in front of Esteban Ocon.

Zhou’s team-mate Valtteri Bottas did not run in the session following his crash in the earlier running.

Kevin Magnussen rounded out the top 10 for US team Haas and had a spin through Turn 7 late on.

Sainz wound up 11th following his early crash and was left with only nine laps on the board.

The session was also halted late on when Nicholas Latifi parked his Williams after complaining of a loose rear-right corner.