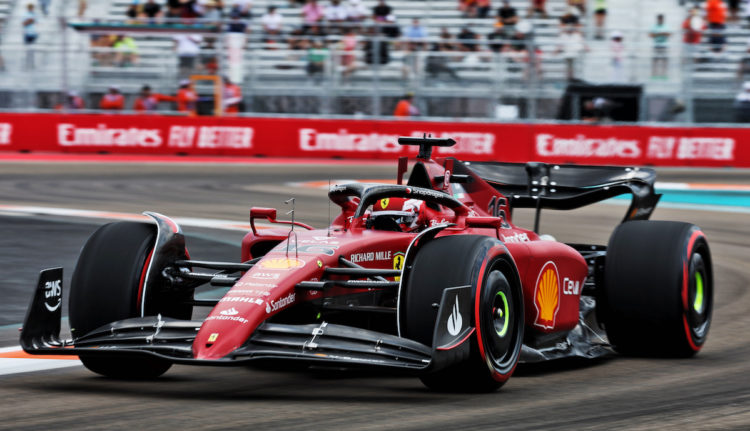 Drivers got their first taste of the 19-turn Miami International Autodrome, which winds its way around the Hard Rock Stadium, during Friday afternoon’s opening one-hour session.

The session took place in typically hot and humid conditions in Miami, with air temperature peaking at 34c, and track temperature exceeding 50c.

Leclerc recovered from an early spin at Turn 1 to set the fastest time of 1:31.098s.

George Russell emerged as Verstappen’s nearest challenger as Mercedes showed hints of improvements after bringing a smattering of updates.

The W13 has been equipped with an updated front wing endplate and rear wing mainplane for drag purposes and Russell finished just 0.071s behind Leclerc.

Team-mate Lewis Hamilton was down in eighth place after encountering traffic on his final push lap.

Valtteri Bottas was the only driver to hit the barriers at the new circuit as he spun through Turn 7 and hit the wall midway through the session.

Bottas lost the car through the left-hander, which gradually tightens around the ‘fake marina’, and suffered a rear-first impact with the barriers, causing damage to the rear of the Alfa Romeo C42.

Ferrari’s Carlos Sainz had the wildest moment of the session after he spun through Turn 4.

Sainz rotated at high speed but while he avoided hitting the wall the force of the spin caused damage to his left-front tyre and he crawled back to the pits for a spare.

He classified sixth, the only driver in the front half of the field to clock his best time on Mediums as opposed to Softs, behind AlphaTauri’s Pierre Gasly, while Alexander Albon was an eye-catching seventh for Williams.

Kevin Magnussen provided encouragement for Haas – chasing its first point on home soil since 2016 – as he finished ninth, with Daniel Ricciardo edging McLaren team-mate Lando Norris for the final spot inside the top 10.

Second practice for the Miami Grand Prix is scheduled to begin at 17:30 local time