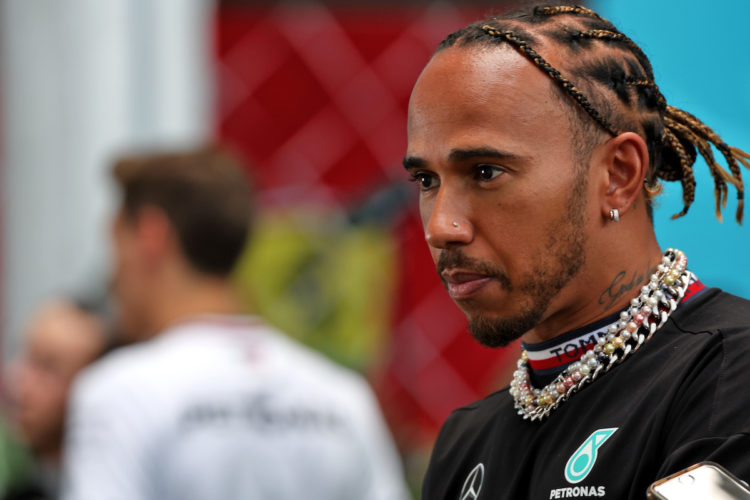 Ahead of this weekend’s Miami Grand Prix, F1 Race Director Niels Wittich clarified that any form of body piercing or metal neck chains are prohibited while driving the car.

Drivers and teams were reminded of the relevant section of the International Sporting Code ahead of the round in Australia last month.

However, it was believed that there was a grace period to allow drivers to make arrangements, with the protocol now in place for Miami.

The FIA outlined that there exists a threat of jewellery hindering “both medical interventions as well as subsequent diagnosis and treatment should it be required”.

Hamilton asserted that he planned to continue to wear jewellery, and spoke again of the matter in Miami.

The Briton stated that “it’s almost like a step backwards”, adding that there are “more important causes that we need to be focused on”.

Hamilton said that he has a piercing where “he can’t really explain where it is”, but clarified that it is made of platinum and is not magnetic, meaning he hasn’t had to remove it during MRI scans throughout his career.

The 37-year-old is keen to avoid locking horns with the FIA over the matter and has contacted FIA president Mohammed Ben Sulayem to discuss the situation.

“It seems unnecessary for us to get into this spat. So I will try to communicate and work with Mohammed [Ben Sulayem]. I’m here to try to be an ally of the sport, of Mohammed and F1.

“As I said, I think we’ve got bigger fish to fry, bigger things to do, more impact to have. So that’s really where I think the focus should be.

“If they stop me, then so be it. We’ve got a spare driver so we’re all ready and prepped for the weekend. There’s lots to do in the city anyway! It’ll be good either way.”