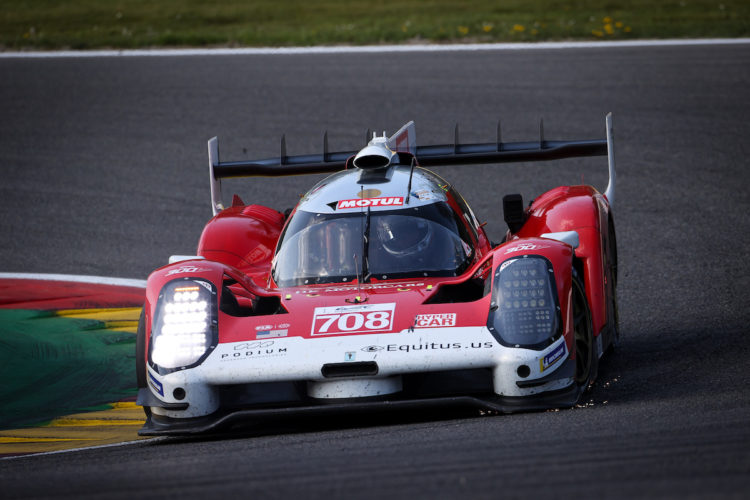 The #708 Glickenhaus 007 LMH will start the 6 Hours of Spa-Francorchamps from pole position, with Olivier Pla setting a 2:02.771 to go fastest in qualifying.

Pla’s lap was 0.228 faster than Matthieu Vaxiviere in the race-winning 100 Miles of Sebring #36 Alpine A480, who’ll start alongside the red and white Glickenhaus on the grid for tomorrow’s race.

Third and fourth were the two factory Toyota GR010s, with #7 leading #8. Kamui Kobayashi set a 2:03.087, just over three tenths slower than Pla in the Glickenhaus and four hundredths faster than teammate Brendon Hartley in the sister #8 car.

Over in LMP2, Alessio Rovera took pole for #83 AF Corse ORECA 07-Gibson — the only Pro/Am car in the top 10. Rovera set a 2:04.246 around the famous Belgian circuit, beating Robin Frijns in the #31 WRT ORECA 07-Gibson by just 0.044. Third in class was the €22 United Autosports ORECA 07-Gibson, with Felipe Albuquerque behind the wheel.

Porsche locked out the GTE-Pro front row, with Gianmaria Bruni and Michael Christian faster than their Ferrari and Corvette rivals. Bruni took class pole with a 2:14.301 in the #91 Porsche 911 RSR, almost two tenths up on Christiansen in the sister #92 car.

The lone #64 Corvette C8.R was third, with Brit Nick Tandy behind the wheel setting a 2:14.606, beating out the Ferrari duo from AF Corse, but neither looked like challenging the Porsches.