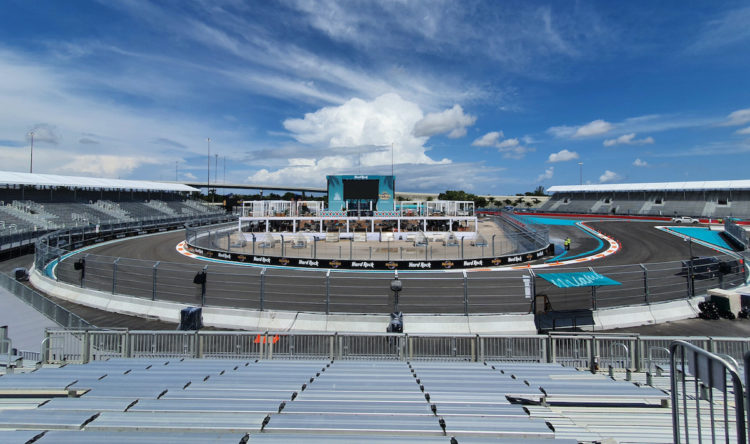 Formula 1 heads to Miami for the first time this weekend with the Hard Rock Stadium located in Miami Gardens playing host to the pinnacle of motorsport.

The circuit, which loops around three sides of the stadium, has been praised by drivers who have tried it out on the simulator already, but the true test will come on Friday when they drive the real thing for the first time.

Circuit architects, Apex Circuit Design and founder, Clive Bowen, are hopeful that their design will generate excitement and close racing with so-called ‘mistake generators’ integrated into the circuit in the hope of forcing drivers into small mistakes that will encourage overtaking.

“We had to ensure that we had a racetrack that had enough of a Jekyll and Hyde personality that they were mostly sections with grade change and a lot of traction which require a soft setup on a car, then some super high-speed sections where you want to have a stiff setup to get the best from aero performance and therefore lateral grip through the corners,” explained Bowen.

An almost blind Turn 15 combined with a long straight almost immediately after, should force drivers into mistakes and open up opportunities for overtaking into Turn 17.

“It’s what we call a ‘mistake generator’ so the opportunity for drivers to gain position because somebody in front overdrives is quite high.”

Bowen also revealed that his team worked through 36 different layout simulations before finally settling on the current layout, which is a 19-turn, 5.14km circuit.