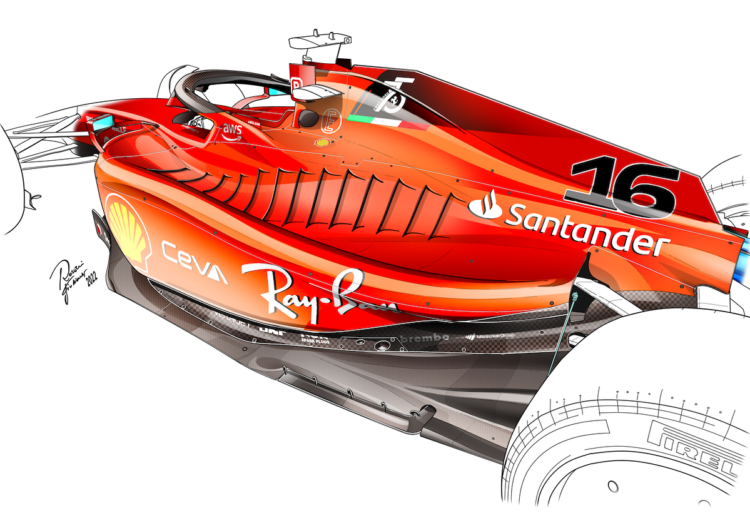 F1 officially opened the European-leg of the season at the Imola circuit last week, and as usual, the first technical updates on the single-seaters arrived.

The Imola weekend was the first important appointment of the 2022 season for the introduction of the first updates designed by the various teams to improve the cars. After the data collected in the tests and in the first non-European races (Bahrain, Saudi and Australia), the teams brought their first package of aerodynamic innovations, with Spain’s Barcelona round likely to see more updates.

Most of the teams have introduced updates aimed at solving two substantial problems that are afflicting this new generation of 22′ single-seaters, namely excessive weight and porpoising.

Ferrari was the only Imola team not to have introduced any new features on their F1-75. This news can be seen in many ways, but it is certain that Ferrari is currently the most complete and versatile single-seater on the grid, and that it needs less forced development.

The Italian team, which has returned to the top of F1 after two years of struggles, expressed through team boss Mattia Binotto that there will be no forced developments or experiments on the F1-75. Maranello is just a few kilometres from Imola, and it is strange to think that Ferrari has not introduced new parts to be tested on the track, also in view of the next events. The format of the weekend of the Emilia Romagna GP certainly had an impact on this aspect, with only one session before parc fermé restrictions due to the sprint race on Saturday.

In Australia, Ferrari tested a new diffuser in free practice, revised in the interior area just before the rear crash box. However, this new specification was not seen on the Imola circuit, and Ferrari raced the entire weekend with the previous solution.

On the F1-75 at Imola an evident porpoising was confirmed, but it doesn’t seem to be a major concern for the Scuderia’s engineers. If Red Bull is very flat without jumping, Ferrari suffers from hopping only in the last stages of the straights. The real problem in this regard is Mercedes, which suffers from porpoising even when cornering and this produces a significant loss of downforce.

Mercedes in Imola tried to bring the first developments on a W13 that continues to create difficulties for the Constructors’ world champions, who suffered a lot on the Italian circuit, especially in qualifying. The W13 continues to prove to be a difficult car to understand, which requires a lot of work on Fridays in optimising the set-up. The shorter weekend on Friday due to the sprint race did not help the Brackley team to find the right path.

Hamilton and Russell’s single-seater at Imola was equipped with a new floor structure, which saved roughly 5kg of weight along with other lighter components. The overweight cars of many teams is the first and easiest thing to counter in an attempt to gain tenths of a second on the lap.

At an aerodynamic level, Mercedes has also brought a new package that should anticipate more substantial changes that will arrive in Barcelona. The flow deviators in front of the cooling vents of the radiators have been modified and increased, to energise the flow towards the lower part. In addition, the mirror supports have been slightly revised.

Toto Wolff’s team once again carried out rear wing tests on Friday with the two drivers testing different aerodynamic configurations. The wing in the structural part has always been the same since the beginning of the season, but Mercedes changed the size of the mobile flap string, looking for less drag solutions with a more cut spoiler in the upper edge, to which a gurney flap can be added if necessary.

The Milton Keynes team does not have to cope with porpoising, and it remains by far the car that least exhibits this phenomenon. The focus of the work on the car designed by Adrian Newey concerns overweight and reliability, burdens that affect the results against Ferrari. For the Austrian team there was talk of being more than 15kg overweight during the pre-season tests compared to the minimum weight of 798kg imposed by the FIA.

The overweight RB18 is a plague that Christian Horner’s team has been trying to tackle since the start of the season. After removing the paint from the front wing in the first races, such as Mercedes and Williams, the car of Verstappen and Perez in Australia showed up with the first technical innovations, combining aerodynamic developments with the need to lose a few kilograms.

In Melbourne, Red Bull made a slight modification to the front wing in the endplate, shortening the shape of the outer plate. Red Bull has therefore decided to save a few grams by shortening part of the edge of the front wing, thus without occupying the maximum volume allowed for the shape of the endplate. This was then combined with a slightly revised flow diverter, with a more twisted shape, similar to the Alpine solution.

This solution was also confirmed at Imola, where the team of Verstappen and Perez introduced another small low-cost aerodynamic innovation, copying the double T-tray of Ferrari and Aston Martin. The dual-level splitter allows you to generate a vortex that wedges inside the venturi channel, and which helps accelerate the flow by increasing downforce.

A solution that Ferrari had claimed to have copied immediately after the presentation of the AMR22 and immediately adopted it on the F1-75. Red Bull, on the other hand, waited a few races to fully evaluate the introduction of it on its RB18. However, it remains a low-cost solution, which in a budget-constrained F1 is certainly a wise choice.

Red Bull is concentrating its resources at Milton Keynes to gain tenths on Ferrari by approaching the minimum weight of 798kg, in order to better manage weight distribution with the use of more ballast. According to many insiders, the difference between Red Bull and Ferrari at the moment is due to the excessive weight of the RB18, and as soon as this gap is filled Red Bull could really become the best performing car.