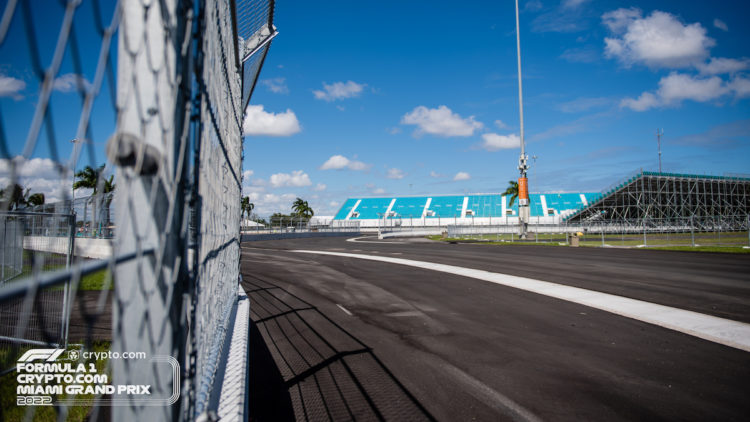 Valtteri Bottas says he expects to see “good racing” at the upcoming Miami Grand Prix, the race’s first inclusion on the Formula 1 schedule.

Last year, it was announced that Miami would join the calendar in 2022 following several years of planning.

The street track has been constructed around the Hard Rock Café stadium, home to the Miami Dolphins of the NFL.

The race will form the fifth round of the 2022 campaign, and will be the first of two grands prix in the United States this year, with Austin, Texas hosting its race in October.

Having trialled the Miami circuit in the simulator, Bottas is expecting that the circuit will allow for overtaking manoeuvres, rather than a procession.

“[I had] proper running there in the sim,” Bottas said. “And actually, was nice to see, that it seems to be a really good track for overtaking.

“I think the way the track has been planned, I think, from my side, it looks positive. It should be good racing.

“Let’s see how it is done in real life but to me on paper, it looks good. And I’m sure as an event it’s going to be pretty amazing.”

Bottas wasn’t the only driver who has tested the track in the simulator, with AlphaTauri’s Pierre Gasly sampling it ahead of this weekend’s race.

The Frenchman also voiced his approval for the layout: “I’ve tried it and I must say it looks pretty awesome. I really liked the layout,” he said.

“I think we should have some pretty good American entertainment, good entertainment the whole weekend, so very excited about it and the location is unique. So very hyped about the weekend.”