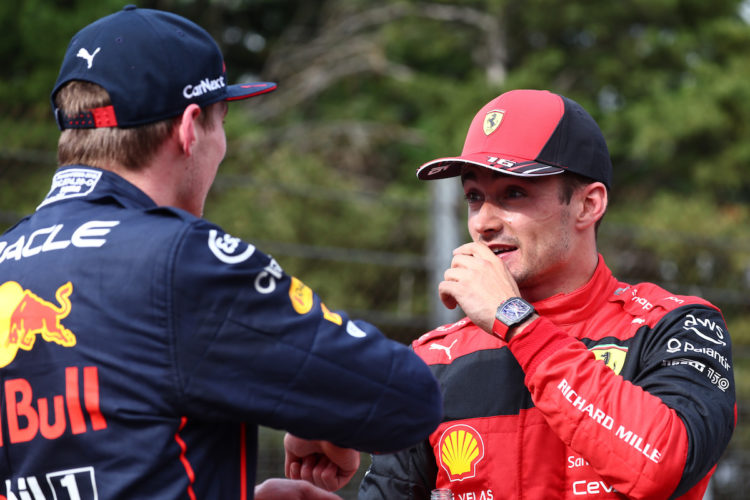 2021 Formula 1 World Champion Max Verstappen says it is “really nice” to fight some of his karting rivals in F1.

In almost all modern cases, the career of an F1 driver begins at karting level, before they progress through the junior categories ladder.

F1 drivers of a similar age group often find themselves competing in the same championships, from karting through to single-seaters.

Verstappen and Ferrari’s Charles Leclerc had a known rivalry during their karting years, with a clip on YouTube of the pair unhappy with each other following a karting crash racking up almost two million views.

Across the opening four rounds of the 2022 F1 campaign, Verstappen has been involved in battles with Leclerc, with the pair taking two grand prix wins each.

Verstappen says that Leclerc is not the only former karting opponent that he is competing against in F1, which he states he enjoys.

“I mean, we basically grew up, through go-karting from, I think, [at] 12 years old,” Verstappen said.

“And of course, we were very similar in age. So, we already had, of course, a lot of go-karting battles, but also, we made our way through Formula 1.

“And not, of course, only the two of us, a lot of drivers we know including of course George [Russell], Carlos [Sainz], we already saw each other at the go-karting tracks.

“Now we’re all here in F1, basically fighting with top teams. And yeah, it’s really nice to see that and I hope, of course, it can continue for a long time.”

When asked how his relationship with Leclerc has changed since his karting days, Verstappen said: “We’ve matured a lot! And we’re both in Formula 1.

“We’re at two top teams and are fighting for race wins. What happened in go-karting, you can laugh about it now. Yeah, good times!”