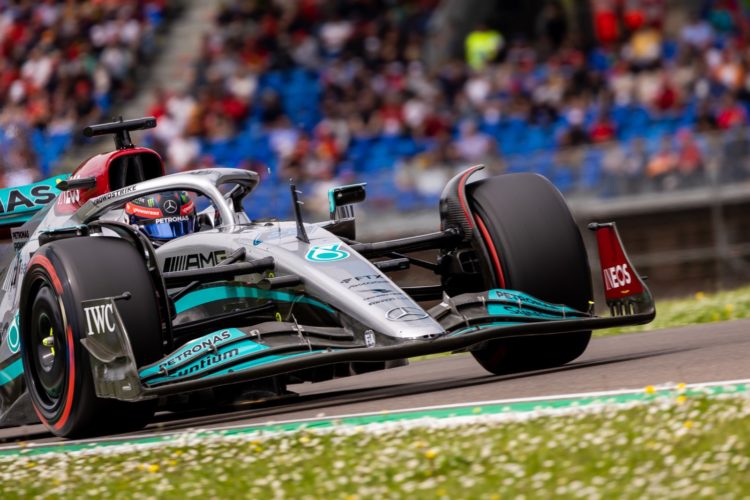 George Russell believes that Mercedes’ race prospects are being undermined by its difficulty in getting its tyres into the optimum window during qualifying.

Russell has yet to qualify higher than sixth in 2022 and at Imola was eliminated in Q2 alongside team-mate Lewis Hamilton.

Russell salvaged an excellent fourth in the race, having made up five positions on the opening lap, before overhauling Haas’ Kevin Magnussen during the first stint.

Hamilton was unable to gain ground at the start and was then stuck in a midfield train throughout the race, classifying in 13th position.

“Whether we’re getting the most out of the car is a different story and I do think things have fallen slightly in our favour with these first four races,” said Russell.

“We’ve got these overall limitations with the car with the bouncing, and we know that we are struggling with the tyre warm up and this is the coldest race weekend we’ve had by far this year.

“I think it’s been a bit of a trend since Bahrain, we’ve progressively gotten a bit slower in qualifying, and I think that’s because Bahrain is the hottest we’ve experienced so there was no problem with tyre warm up.

“Then we went to Jeddah, and it was still hot, but the track was a bit smoother. Melbourne, a bit cooler. At Imola, very cold.

“That’s when you see the McLarens, Alpines, and Haas coming into their own but then struggling a bit more in the race.

“We need to find a better compromise because we were fortunate, we had a decent result, but ultimately, we were starting far too low on the grid.”

Hamilton has twice qualified fifth this year but was eliminated from Q1 in Saudi Arabia and dropped out of Q2 in Italy.