Russell suffered back pains from porpoising in Imola 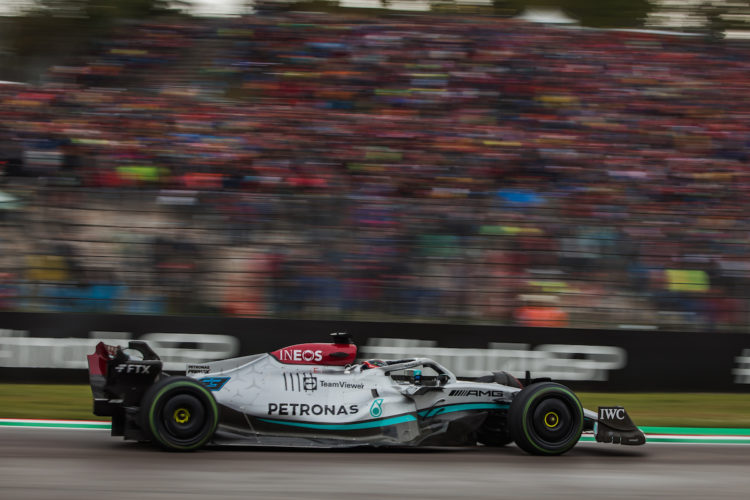 George Russell says a solution to porpoising must be found after he endured back pain throughout the Emilia Romagna Grand Prix weekend.

Many teams have suffered from bouncing on the straights at the start of the 2022 season, however the porpoising has often been extreme in Mercedes’ case.

During Friday practice at Imola last weekend, the bouncing was so severe on Mercedes’ car that Russell broke the floor stays underneath the car.

Porpoising has been a major factor in Mercedes’ lack of pace to start the 2022 season, as it has been forced to raise the ride height of the W13 challenger in order to decrease how much the car bounces.

But Russell still had an uncomfortable ride during the Imola weekend, which he says led to pain in his back and chest.

“But the bouncing really takes your breath away, it’s the most extreme I’ve ever felt it.

“I really hope we find a solution, and I hope every team who is struggling with the bouncing finds a solution because it’s not sustainable for the drivers to continue with this level.

“This is the first weekend where I’ve truly been struggling with my back, and almost like chest pains from the severity of the bouncing, but it’s what we have to do to get the fastest lap times out of the car.”

Mercedes team boss Toto Wolff also commented on the extremity of the bouncing, admitting post-race that he wondered how his two drivers kept the car on the track during the grand prix.

Russell ended the race in fourth place, while team-mate Lewis Hamilton struggled to make inroads, crossing the line outside the points in 13th.