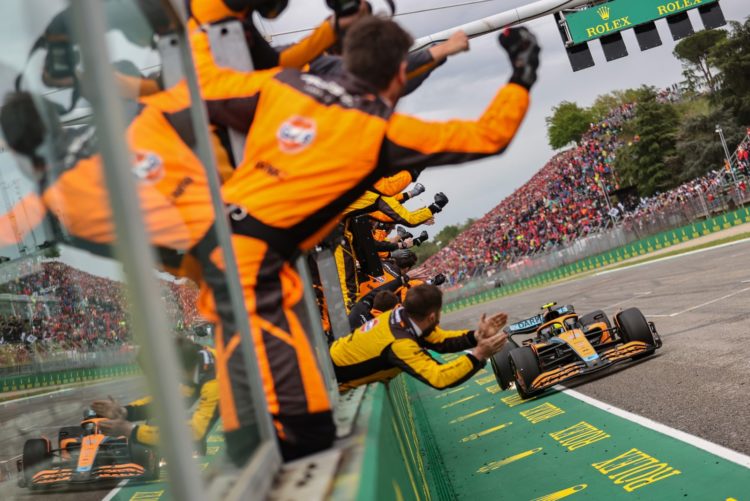 Lando Norris says neither he nor McLaren could have envisaged claiming a podium finish so soon after its awful start to the 2022 Formula 1 season.

McLaren failed to score points in Bahrain, and was slumped towards the rear of the pack, as it voiced concerns that it would take time to address the weaknesses of the MCL36.

It showed an upturn in performance in Saudi Arabia and Australia but indicated that it felt the respective circuit layouts played to the relative strengths of the car.

However at Formula 1’s Emilia Romagna Grand Prix Norris qualified third in difficult conditions and captured fifth in Sprint, going on to hold fourth for much of the race until Charles Leclerc’s error promoted him into the podium positions.

“Surprised I guess to be here, but feels amazing,” said Norris. “So, from where we were, what, three weeks ago, four weeks ago, a month, in Bahrain to be on a podium, I genuinely didn’t think we would be on the podium all year after Bahrain. So it’s quite a shock.

“Maybe not surprising after the kind of progress we’ve made over the last month but yeah definitely not a podium you know, with how much quicker the Red Bulls and the Ferraris are.

“It’s hard to ever imagine yourself on the podium and a great result would have been P5. But a few good things throughout this race, you know, an amazing start to be ahead of the Ferraris, to stay out of the chaos which happened behind, just I guess a lonely but a great race.

“Qualifying P3 already was a pretty good achievement for us. So great weekend. Nice to see the improvements we’ve been bringing and to reward everyone with a podium is even better.”

Norris downplayed suggestions that McLaren now has the third-fastest car and pointed to he and the team executing a clean weekend as a catalyst for its result.

“The Mercedes wasn’t so bad this weekend,” he said. “I think we were a little quicker than them, probably throughout. The Alfa Romeo was maybe quicker. He was off at the start, I think: quicker [in Sprint], maybe quicker [in the race] – just couldn’t get past George [Russell].

“It doesn’t really matter, we beat two cars who are probably a second a lap quicker than us: one ended up in the wall and one ended up in the gravel, so doesn’t necessarily mean, if you have the third or fourth or fifth best car. I think we just executed a great race from our side.

“The car was good, and I had good confidence and that’s all I needed.”