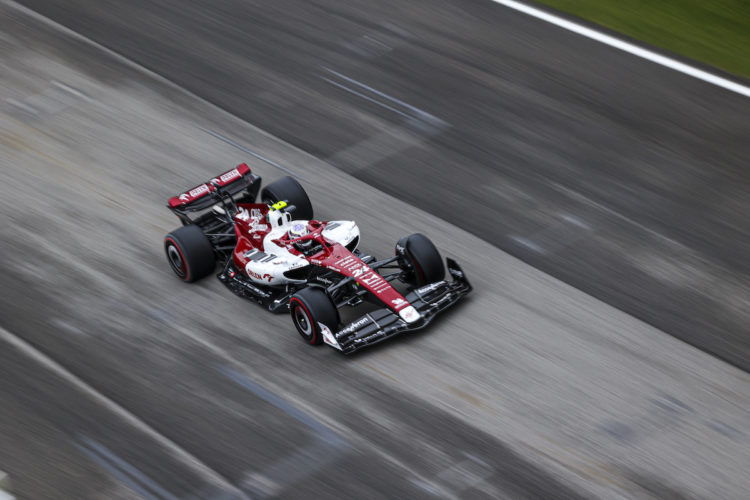 Zhou collided with AlphaTauri’s Pierre Gasly on the opening lap, and was sent into the barriers as the cars navigated Turns 9 and 10.

The Stewards have found Alfa Romeo to be in breach of Article 40.6 of the FIA sporting regulations, which states that two hours after qualifying or the Sprint, cars “must be covered and ready for FIA seals to be applied in order to ensure they remain secure until the following day”.

Alfa Romeo’s work to repair Zhou’s car went beyond the two hours allocated, while furthermore, it breached Article 40.9, as it continued to work on the car under parc ferme conditions while unsupervised.

“The Competitor admitted that modifications were made to the car,” read a Stewards’ statement.

“In any event, given the lack of supervision the Stewards would have been entitled to draw an inference that modifications were made to the car and/or changes were made to the set-up of the suspension while the car was to have been held under parc ferme conditions.

“The penalty for breach of the parc ferme conditions is specified in Article 40.9 b), which is for the driver to start from the pit lane.”

Despite the setback, Zhou has set his aim on returning to the points in Imola, having scored at one of the opening three races in 2022.

“It’s a shame as we had a good opportunity to gain some places, the car has quite a bit of damage and it’s going to be a lot of work for the mechanics, unfortunately,” Zhou said.

“Now we need to focus on making a comeback tomorrow: we still have a good car and you never know what can happen.

“The team is working in the right way, our upgrades work and we saw today that overtaking is possible.

“We will do our best – we made it into the points from last at turn one in Melbourne and we’ll try to do it again this time.”