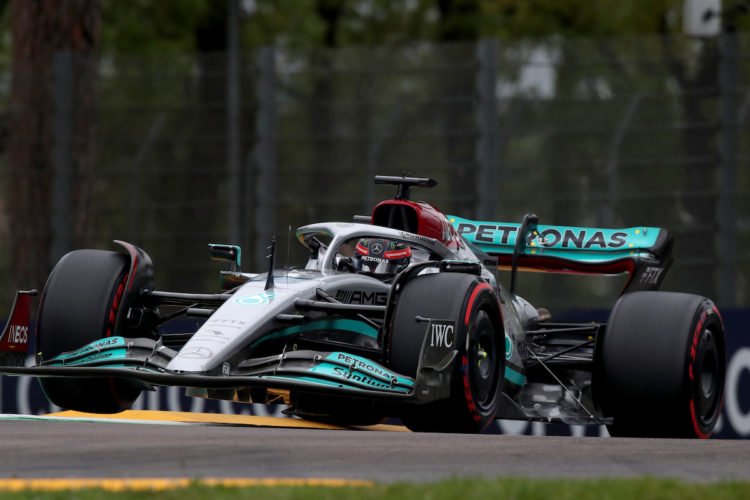 George Russell has ended the final practice session from the Imola Circuit on top of the timeshees, setting a 1:19.457 on Saturday afternoon.

It was the second practice session of the weekend, as F1 is using the revised Sprint format for the Italian round.

Russell’s lap time was less than a tenth faster than the best effort from Sergio Perez, who ended up in second place for Red Bull.

Championship leader Charles Leclerc was third for Ferrari, ahead of Lewis Hamilton. The Mercedes driver was forced to take to the grass after getting into trouble at Turn 14 early on in the session.

Max Verstappen was seventh, while the AlphaTauri duo of Yuki Tsunoda and Pierre were eighth and ninth respectively.

Rounding out the top 10 was the Alfa Romeo of Zhou Guanyu.

While the Chinese driver enjoyed an uninterrupted session, his team-mate Valtteri Bottas didn’t make it onto the circuit after the team was forced to undertake work on his car in the garage.

The issues came after Bottas’ qualifying session on Friday ended prematurely when he was forced to park his car at the side of the road.

McLaren too endured a nightmare session, with Daniel Ricciardo also not taking to the circuit during the 60 minutes of action due to his own issues.

While his team-mate Lando Norris started the session, a brake problem was noticed early on, which forced him back to the garage. Norris only returned to the track in the final minute of the session.

The cars will be back on the circuit at 4:30 PM local time for the first sprint race of the 2022 season.