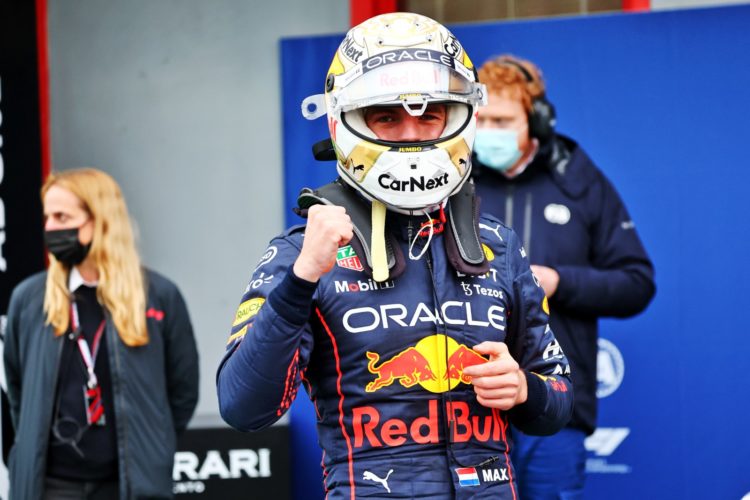 Max Verstappen claimed his first pole position of the season during a rain-hit qualifying session at Imola that featured five red flags.

Verstappen set a time of 1:27.999s to finish almost eight-tenths clear of title leader Charles Leclerc as rain swept across the circuit midway through Q2.

In an eventful session Mercedes had neither driver in Q3, Carlos Sainz crashed early in Q2, while successive stoppages late in the final shootout scuppered several efforts.

A messy Q3 on disrupted day

At a murky and cold Imola Verstappen and Leclerc traded fast times before the reigning champion wound up with the benchmark when Valtteri Bottas stopped along the back straight.

That caused one suspension, while marshals retrieved his car, while shortly after the action resumed – with two-and-a-half minutes on the clock – Lando Norris spun into the gravel.

Norris’ stricken car, allied to there being under a minute on the clock, meant the session was brought to an early halt – leaving no-one with any time to improve.

Norris’ spin secured him third on the grid, behind Verstappen and Leclerc, with Haas’ Kevin Magnussen a standout fourth, despite causing the first red flag early in Q3 when he went off the road.

It marked Haas’ best qualifying result in its Formula 1 history.

Bottas finished eighth in spite of his stoppage while Sebastian Vettel made it through to Q3 but was slowest of the nine contenders.

There was a flurry of activity in the early stages of Q2 as drivers sought to get a lap in before rain struck Imola.

Unfortunately for Sainz while he recorded a sufficient benchmark he also spun into the wall and wrecked his prospects of contending for top spot.

Sainz slid through the final corner and suffered a left-hand-side impact that caused terminal damage to the F1-75.

During the red flag period to retrieve Sainz’s car the anticipated rain hit and meant no-one was able to improve across the remaining 10 minutes of action.

That eliminated both Mercedes drivers from contention on a day in which the W13 struggled for performance.

Lewis Hamilton scraped through to Q2 by just 0.004s but was left down in 13th spot, two places behind George Russell.

Even without the delay caused by Sainz’s stoppage Mercedes lacked the speed to contend for the top 10 spots, leaving it out of contention in the final session for the first time since Japan 2012.

The Mercedes drivers were split by Haas’ Mick Schumacher while Zhou Guanyu and Lance Stroll finished at the foot of the Q2 pecking order.

AlphaTauri’s factory is located just 15km from Imola but any home advantage evaporated during a dismal display for the team as it suffered a double Q1 exit for the first time since 2018.

Yuki Tsunoda was left in 16th place, with Pierre Gasly 17th, leaving the squad with an uphill task to break into the points.

Nicholas Latifi suffered a spin, and was three seconds off the pace, en route to 18th spot, while Esteban Ocon remained in the garage during the closing stages due to a suspected gearbox issue as the track evolved and was shuffled out in 19th place.

There was a dramatic moment during Q1 when Alexander Albon suffered a suspected right-rear brake failure that caused his right-rear tyre to fail.

The explosion caused debris to spread across the circuit, with parts of it briefly alight, with race control wisely opting to suspend the session.

Albon was able to recover his damaged Williams to the pits but he took no further action and will start Sprint – his first experience of the format – from last place.

Saturday’s Sprint Qualifying is scheduled to begin at 16:30 local time