Russell broke floor stay due to porpoising during FP1 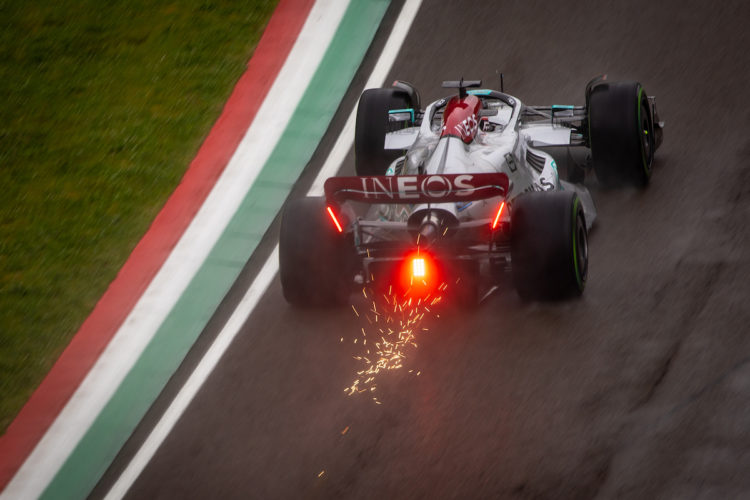 Mercedes Team Principal Toto Wolff has revealed that the metal floor stays on George Russell’s car broke during FP1 in Imola due to severe porpoising.

The Brackley-based squad, as well as other teams, has suffered from bouncing on the straights throughout the opening stages of the 2022 season.

During the first practice session in Imola on Friday afternoon, the W13 car was seen bouncing aggressively as it approached Turn 2, the track’s first major braking zone.

Wolff has revealed that Mercedes’ drivers were forced to lift off on the straight to minimise bouncing, with Russell suffering car damage due to its severity.

“We had George bouncing so much that he actually broke the stay on the floor,” Wolff told Sky F1.

“You can’t drive [down the straight], you have to lift on the straight. I have never experienced in my life bouncing like this, but clearly it’s not driveable.”

Friday’s opening practice session was held in wet conditions, with many drivers having minor off-track incidents during the outing.

Ferrari ended the session on top, while Mercedes was some six seconds down on their Italian rivals.

Wolff says that Mercedes struggled to unlock tyre grip, while Ferrari managed to do so, which was the reason behind the large time deficit ahead of qualifying.

“The Ferraris seemed to unlock that, everybody else is pretty much all over the place,” he said.

“The feedback that we are getting from Lewis and George is that there’s literally zero grip and that these gaps point to the tyres.

“When you are able to unlock that issue, you will do a jump and where that will end, I don’t know.

“I think there will be quite some discrepancies in performance and you could see a team [behind in qualifying]. We were five seconds off the pace – it’s not the car and not the driver.”