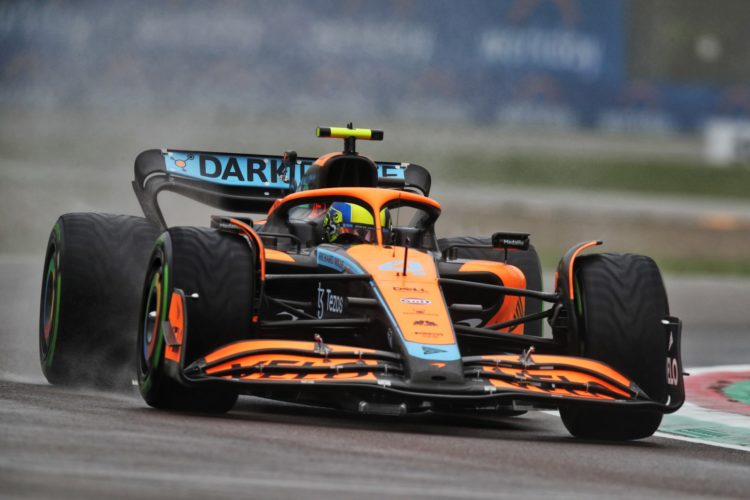 Lando Norris described a top-three start for McLaren at the Emilia Romagna Grand Prix as “a surprise” and credited the team for maximising its chances.

McLaren has had a mixed start to the 2022 season, holding fourth place in the standings, having struggled in Bahrain before displaying improvements at the most recent event in Australia.

Norris moved up to third spot in a rain-hit Q3 at Imola before suffering a spin that brought out the red flags and resulted in an early end to qualifying.

“I am happy, I’m top three, which is quite a surprise for us,” he said. “There was a lot left in the lap. I tried to get the tyres in to temperature, but I pushed too hard on the out lap.

“It’s a shame because there was a chance at least to maybe have a go at Charles [Leclerc]. It’s difficult to say because I am sure everybody can say they could’ve improved.

“There was a possibility for us to go forward even more because the car was feeling good and I was feeling confident, so it’s a shame it ended like that but a good position for tomorrow so I’m happy.”

Norris outlined that McLaren would not have been in such a prosperous condition in fully dry conditions.

“It’s difficult to say, these conditions made a big difference for us today and that’s why we are in the position we are,” he said.

“I think if it was completely dry, we would not be in third place. We made the most of today of course and we’ve given ourselves the best opportunity to score some good points this weekend.”