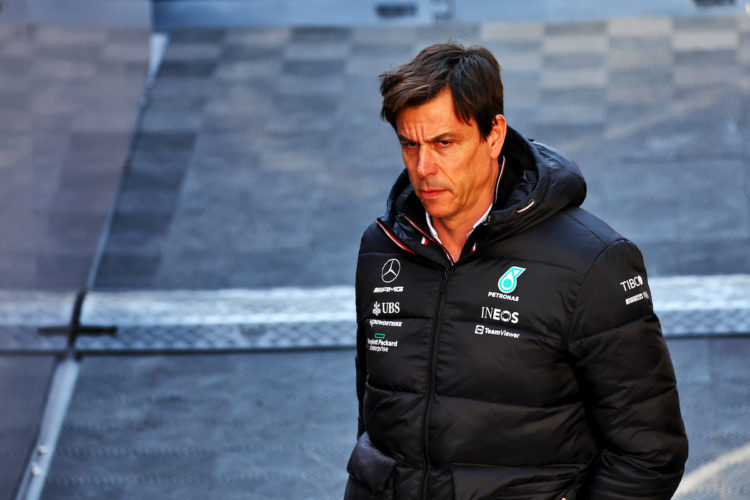 Toto Wolff has not ruled Mercedes out of the 2022 Formula 1 championship fight, despite its slow start to the season.

This year, new technical regulations have come into play, with Mercedes taking a knock in performance compared to previous campaigns.

From 2014 to 2020, it was unbeaten in the Drivers’ Championship, while it took every Constructors’ title on offer in the turbo-hybrid era that began eight years ago.

However in 2022, it has started the season notably as the third fastest team, behind rivals Ferrari and Red Bull.

Lewis Hamilton and George Russell have picked up one podium finish each across the first three races however Ferrari appears to possess the strongest package, and it currently leads both the Drivers’ and Constructors’ standings.

But with development set to play a significant role in the championship hunt, Wolff has refused to eliminate Mercedes from contention in the early stages of the season.

“I think we are on the back foot,” Wolff said. “If I look at it from a mathematical standpoint and probability I would say the odds are two to eight or eight to two.

“But this is motor racing and in motor racing anything can happen. Teams can DNF and if we unlock the potential of the car we are right back in the game.

“So as a racer I would say it’s probably 40/60 and as a mathematician I would say the odds are worse against us.

“But it’s the third race of the season and we are not going to write the title off, so it’s just the current status quo. We are 0.7s off.”

Despite possessing a car that has been slower than Red Bull in qualifying trim, reliability issues have hampered the energy drink-backed team, with Mercedes currently sitting ahead of it in second place in the Constructors’ standings.