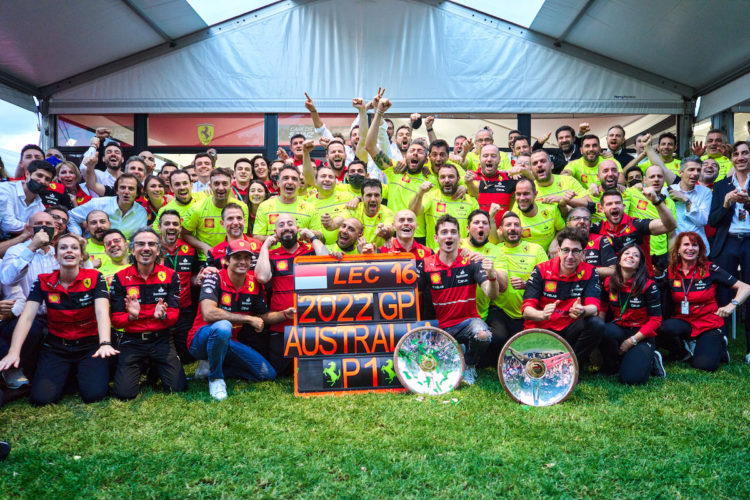 Ferrari Team Principal Mattia Binotto admits that Ferrari’s pace at the start of the 2022 Formula 1 season has exceeded its expectations.

The Maranello-based squad has won two of the first three races of the campaign, with Charles Leclerc currently leading the Drivers’ Championship by 34 points.

Ferrari also holds a sizeable lead in the Constructors’ standings with a 39 point margin to Mercedes in second place.

Throughout pre-season testing, Ferrari appeared to possess a strong package, which was confirmed when the campaign got underway in Bahrain last month.

But although Binotto says that Ferrari knew its 2022 car would be competitive, it didn’t expect to start the season so strongly.

“I knew that the team was a great team and we improved ourselves compared to the past seasons and was hoping to have a competitive car at the start of the season.

“When coming to the winter testing, we knew we had a competitive car but certainly I wasn’t expecting such a good start to the season, I think it would be unfair to think that.

“I still believe that the difference between us and the others can be very little. It will be a great fight in the next races certainly.”

Although Leclerc has had an advantage over team-mate Sainz during the first three rounds, Binotto asserts that two are “free to fight” this year.

“Certainly, certainly it’s only three races which have been done now,” he said. “There are still 20 races left, hopefully, 19 or 20 so the championship is still very long. The drivers are free to fight and we are really looking forward [to it].”

Ferrari went throughout the entire 2010s decade without securing a title, with its last triumph coming in 2008.