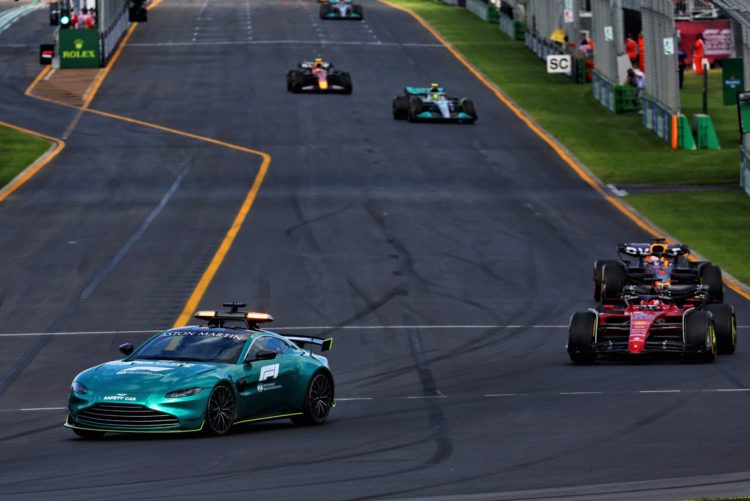 The stewards at Formula 1’s Australian Grand Prix have suggested that the protocol behind the Safety Car is reviewed following a close call during the race.

Haas driver Mick Schumacher came perilously close to striking the rear of AlphaTauri driver Yuki Tsunoda as they made their way along the main straight.

Stewards investigated the incident but deemed that no further action was warranted.

In their explanation it was outlined that “cars were accelerating and decelerating to keep tyre and brake temperatures up in anticipation of the restart.”

Pierre Gasly, ahead of Tsunoda, slowed in reaction to the car in front, prompting team-mate Tsunoda to also slow, with Schumacher doing likewise in response.

Stewards outlined that Schumacher was “trying to maintain the 10-car length maximum separation specified in the regulations” and as a result had to overtake Tsunoda while avoiding him.

In their statement the stewards suggested that “it is clear that the speed and braking capabilities of F1 cars, especially while trying to maintain required temperatures in tyres and brakes, are in tension with the 10-car length separation behind the Safety Car traditionally specified in the regulations.”

They went on to outline that “this needs to be a point of emphasis in future driver briefings, to ensure the drivers collectively agree on how best to address this challenge before an unfortunate incident occurs.”

Each race so far in 2022 has featured at least one Safety Car period owing to incidents.

In Australia it appeared following separate accidents for Carlos Sainz and Sebastian Vettel during the race.