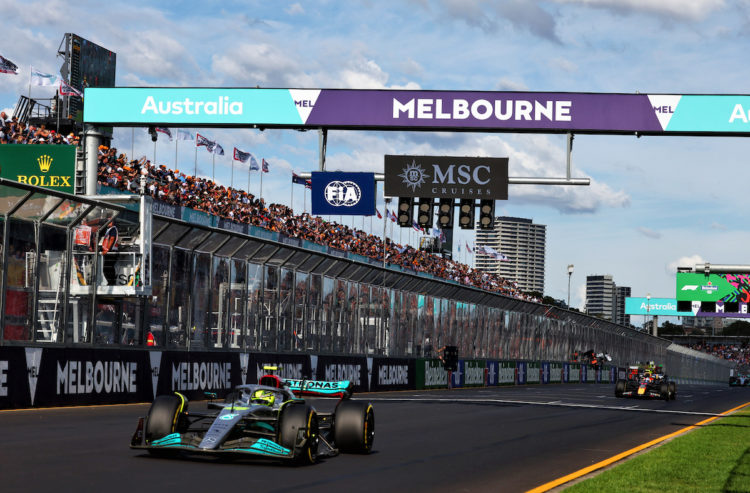 Lewis Hamilton has labelled Mercedes’ result at the Australian Grand Prix as “amazing” following its struggles during the race weekend.

The 37-year-old crossed the line in fourth place, while team-mate George Russell took his first podium for Mercedes in third.

The seven-time World Champion ran as high as third during the race, but dropped behind Russell after the former Williams driver received an advantage by pitting under a Safety Car.

Hamilton stated on Saturday that Mercedes hasn’t made progress on its pace since the start of the 2022 campaign.

However, he has praised the Brackley-based squad for extracting the maximum potential from the car during Sunday’s race in Melbourne.

“It’s an amazing result for us as a team. It’s such a positive,” Hamilton said.

“We were over one second off on Friday and it wasn’t looking spectacular at that point. We did some great work overnight to qualify on the third row and then a great start.

“I was up in third and it felt great to be fighting, or to feel like we’re fighting for a podium in that moment. But obviously we couldn’t hold with the pace of the Red Bulls.

“Whilst we haven’t necessarily improved the car over these three races, I think we’ve really extracted the most we could points-wise.

“From my side, I let the team down in the last race [in Saudi Arabia] and didn’t get the points but to come away with this result, is great.”

Hamilton closed up to the back of Russell in the final laps, but clarified that he couldn’t battle his team-mate as his car was overheating.

Hamilton currently sits fifth in the championship standings, 43 points down on leader Charles Leclerc, who took a commanding race victory in Melbourne.