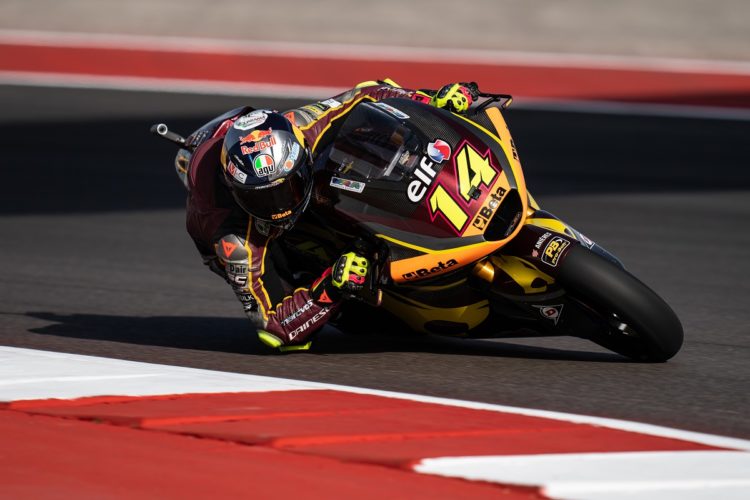 Tony Arbolino survived an attritional Americas Moto2 contest to score his first ever win in the class, while points leader Celestino Vietti crashed out early on while running second.

Having run within the rostrum positions early on, Arbolino soon established himself well in third as the race got into its stride, with Aron Canet leading the way ahead of Vietti.

He soon inherited second though after Vietti lost control of his VR46 Kalex machine at Turn 6, the Italian recording his first non-score of the season.

Only a few laps later Arbolino moved into the leadership of the encounter after Canet also crashed out just prior to mid-distance, the Pons racer losing the rear of his bike at Turn 7.

From this point onwards Arbolino managed to craft a 4.5 second gap at its peak to claim his first ever Moto2 win by 3.4 seconds over Honda Team Asia’s Ai Ogura, who managed to get the better of Jake Dixon in the latter stages to take second.

Despite losing the runners-up spot, Dixon still managed to shadow the Japanese ace home to claim third and his maiden grand prix rostrum result across all classes, the Aspar-riding Brit achieving this landmark finish in his 49th race start.

Marcel Schrotter ended up fourth for Intact GP ahead of Jorge Navarro, the sister Pons entry managing to recover from an early long-lap punishment to complete the top five.

Jeremy Alcoba scored his best ever Moto2 result in sixth as the highest-placed rookie, with Bo Bensneyder and Joe Roberts bagging seventh and eighth respectively.

Augusto Fernandez managed to recover from 18th on the grid to finish ninth, while Barry Baltus scored his first points of the year to round off the top ten.

Pole-man Cameron Beaubier looked set to score his best-ever result of fourth at home as he managed to defeat Schrotter in the latter stages, though the American Racing pilot would heartbreakingly retire on the final tour after tucking the front of his machine at Turn 16.

Pedro Acosta also failed to finish after crashing out from the top five early on, while Indonesian GP winner Somkiat Chantra caused a multi-bike smash after out-braking himself at Turn 12 on the opening tour that saw several other front runners – including Sam Lowes and Speed Up’s Fermin Aldeguer – all exit the event on the spot.

Vietti’s non-score means his points lead is reduced from 21 coming into the event to 14 ahead of the now second-placed Ogura, with Arbolino a further two points adrift and Canet now dropping to fourth as a result of his own early race departure.