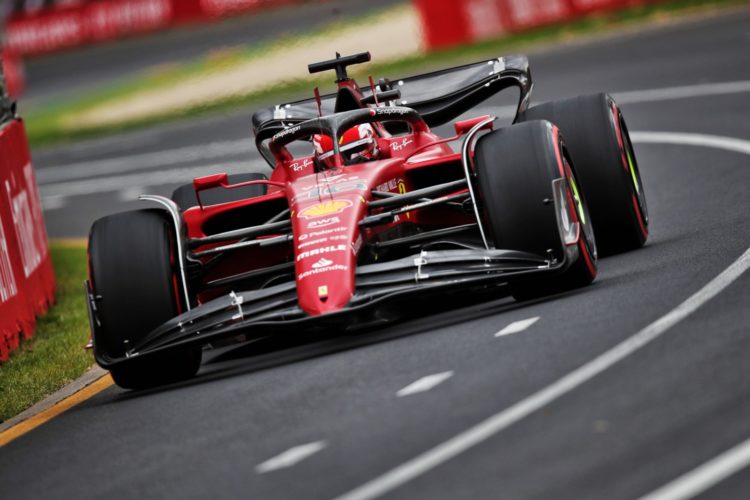 Formula 1 championship leader Charles Leclerc claimed his second pole position of the 2022 season after beating Max Verstappen during the closing stages of qualifying in Australia.

Verstappen held the advantage as the drivers began their final laps in Q3, but Leclerc was able to produce the necessary time to jump the reigning World Champion, setting a lap of 1:17.868s.

Sergio Perez, who has performed strongly all weekend, had to settle for third place but was less than a tenth behind team-mate Verstappen.

Carlos Sainz in the second Ferrari endured a difficult Q3 session, as his first attempt was cancelled out by a red flag.

His final effort wasn’t enough to see him challenge at the front, with the Spaniard forced to slot in down in ninth place.

Following a difficult opening two rounds to the campaign, McLaren produced its strongest outing yet in Melbourne.

Not only did both cars feature in the top ten, Lando Norris ended the session in fourth place, while team-mate Daniel Ricciardo was seventh.

Lodged between the two McLarens was the Mercedes duo, with Lewis Hamilton besting George Russell by one-tenth of a second for fifth.

Fernando Alonso failed to set a lap time in Q3, with his opening attempt looking good enough to put him among the leading Ferraris and Red Bulls.

However, he slid off the circuit at Turn 13 and damaged his car, stating that a loss of hydraulics prevented him from shifting down past fourth gear.

The two AlphaTauris and both Alfa Romeos were knocked out in Q2, as was Mick Schumacher for Haas.

Latifi and Stroll were both eliminated in Q1 after they were involved in a bizarre collision late on in the session.

Latifi slowed before Turn 5 to let Stroll past, but on the run to Turn 6, he attempted to re-pass his Canadian compatriot.

However, Stroll’s front right tyre made contact with Latifi’s left rear, sending the Williams driver into a spin with heavy damage, while Stroll suffered a broken suspension.

Stroll was also involved in a collision in FP3, as he hit the barriers in the final moments of the session. His team-mate Sebastian Vettel, who also crashed in final practice, set a last-gasp time to go 17th, behind Alexander Albon and Kevin Magnussen.

Albon will drop three places due to a grid penalty he picked up in Saudi Arabia following a collision with Stroll.