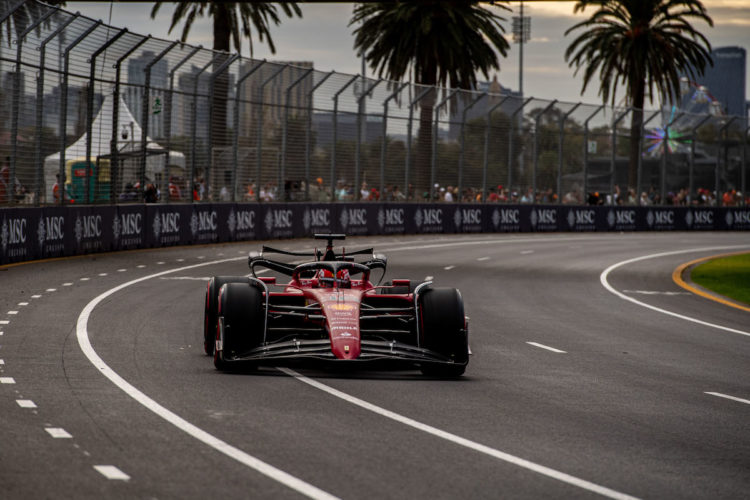 Charles Leclerc says he endured a “tricky” opening day to the Australian Grand Prix weekend, despite the competitive pace he displayed.

The Ferrari driver ended the second practice session from Melbourne on top of the timesheets, two and a half tenths in front of Red Bull’s Max Verstappen.

It was a strong day overall for Ferrari, as it also ended FP1 with the fastest lap time, courtesy of Carlos Sainz.

Despite a positive day behind the wheel of the F1-75 car, Leclerc admits he faced challenges, especially during the early afternoon practice outing.

“It’s a very tricky track, it’s quicker than before,” he said.

“Quite slippery also, but it’s the case on Friday here because we haven’t been driving here for two years and there were no other races here, I think.

“It takes a bit of time before the track improves and get the final grip for qualifying. Overall it was quite a positive day for us, [but] a tricky one.

“FP2 for me was tricky, FP2 it got a little bit better working on the car. Hopefully we’ll do another step for FP3.”

With Verstappen close behind Leclerc at the end of FP2, the Monegasque racer is confident that Red Bull will get closer still ahead of qualifying on Saturday.

“I think already today, they have more than what they’ve shown,” Leclerc said.

“They didn’t put the lap together and Max had a bit of traffic in his fast lap. It’s going to be very close, we’ll have to maximise our car to be starting pole on Sunday.”

Ferrari also suffered from notable porpoising throughout Friday, however Leclerc asserts that the bouncing on the straights is not costing it lap time.

“In Bahrain, we had it a little bit, in Jeddah, a little bit less, now a little bit more,” he said. “It’s not so pleasant but we are working on that.

“For now it’s not too much of a limitation lap-time wise. It’s just for the comfort in the straight, it’s not so comfortable.”