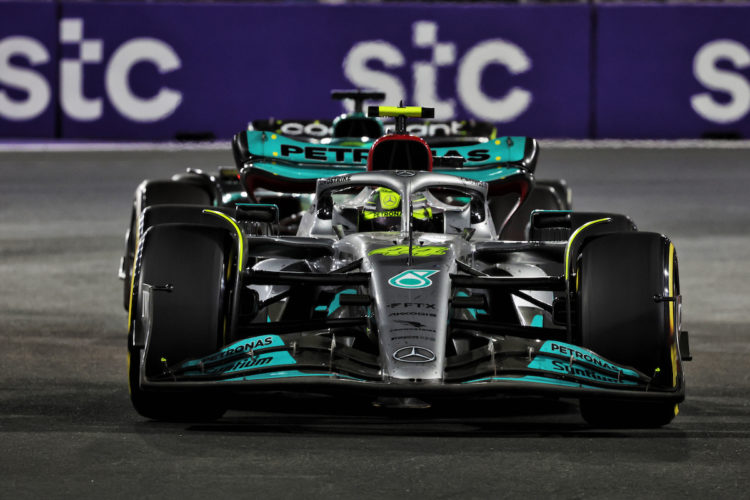 Mercedes says that it is making use of the margin it has to rival teams behind in the Formula 1 pecking order to get on top of its issues with the W13 car.

The Brackley-based squad has entered the year off the pace compared to rivals Ferrari and Red Bull, however it appears to possess an advantage over the remainder of the field.

Mercedes has suffered extensively from bouncing on the straights, which has left it off the pace and competing in “no man’s land”.

“We’re under no illusions what that performance gap is and in Jeddah, it was ultimately a bit bigger than in Bahrain,” said the team’s Trackside Engineering Director Andrew Shovlin.

“But we’ve got quite a lot to find both in qualifying and on long run if we want to challenge the Ferrari and the Red Bull cars.

“However, behind us it looks like we have a bit of margin to that midfield.

“We need to do a good job to be ahead of them, but we have a bit of margin and that buys us a bit of breathing space to allow us to experiment on the weekends, to try and bring solutions to lift the level of performance of the car.”

Shovlin explained that Mercedes hopes to solve its problems over a “phased” process that will be rolled out across the next handful of grand prix weekends.

“This is a problem that is going to be fixed back at the factories both in Brackley and Brixworth,” he said.

“Everyone is working very hard to try and understand the issue and bring solutions and we are going to be doing that in a phased way over the next few races.

“At the track we are going to be doing as much as we can to minimise damage, to score as many points as possible.

“So, really there is two elements to this: maximising the performance in a given weekend but then the bigger part of this is trying to get back to a level where we can compete for pole positions and for race wins.”