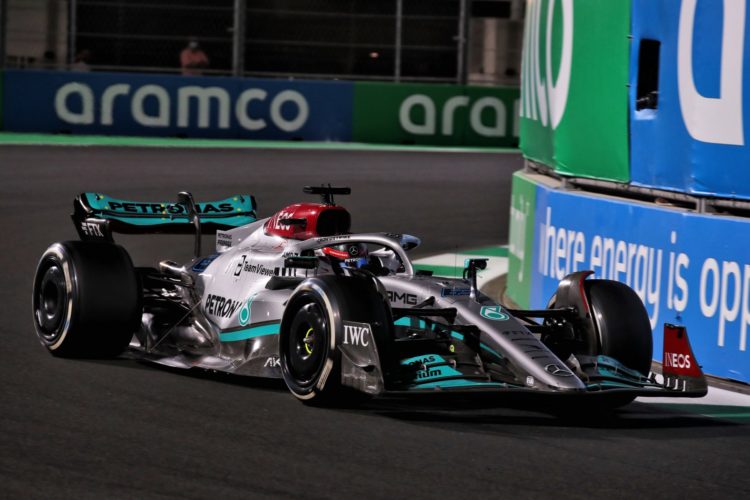 George Russell believes Mercedes will solve 99 per cent of its problems if it can cure its porpoising but that it now needs to take more than “baby steps”.

Mercedes has typically been third-fastest through the opening pair of events in 2022 though holds second in the standings largely owing to Red Bull’s double retirement in Bahrain.

George Russell converted sixth in qualifying in Saudi Arabia into fifth in the race, 23 seconds ahead of nearest rival Esteban Ocon, but 22 seconds behind Sergio Perez.

“We’ve definitely got information, we’re continuing to learn, but at the moment we’re making baby steps and we need to make some leaps and bounds and we’re struggling to find that silver bullet to resolve our issues,” he said.

“I’ve got no doubt when we do that we will find that chunk of lap time but as I’ve said before it’s easier said than done.”

Russell outlined that the bouncing is still the primary factor for Mercedes’ lack of performance.

“There’s so many factors at play when we’re bouncing, sometimes we change the set-up and think it will improve but actually it makes it slightly worse and it’s seemingly a little bit inconsistent,” he said.

“We almost need to pre-empt this issue and also in the race when you have the DRS closed you have more downforce than you do with it open so that’s another factor.

“We’re still learning, it’s far from optimal, but if we solve the porpoising that will cure 99 per cent of our issues.”

Russell affirmed that “we are going to start trying to develop the car around the issues but we need to solve the underlying problem, which is porpoising.

“All of these cars perform best at low ride height and we can’t get anywhere close to where our rivals are running.”