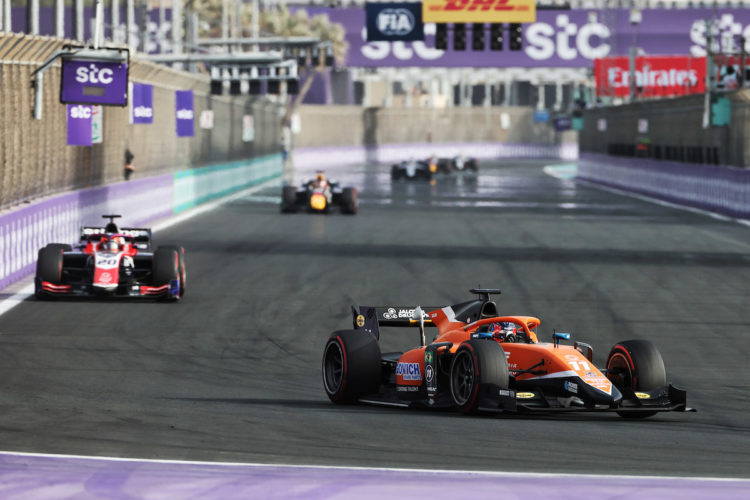 Felipe Drugovich prevailed in the second Feature Race of the 2022 Formula 2 season, dominating the event from start to finish in Saudi Arabia.

The MP Motorsport driver started the race from pole position, and held onto the lead until his mandatory pit stop on lap nine.

Richard Verschoor, who followed Drugovich in second place during the opening stint, pitted on the following lap, however he couldn’t complete the overcut to jump ahead.

The two drivers were evidently the pick of the field, with Drugovich building up a 15-second gap at the chequered flag to Jehan Daruvala, who climbed up to third after starting the race from 14th.

Theo Pourchaire’s nightmare weekend ended with retirement, as his car suffered a mechanical issue early on in the race.

Liam Lawson, who led the Drivers’ Championship prior to the start of the race and was in contention for the race win, retired after a tyre wasn’t fitted properly during his pit stop.

With the victory, Drugovich now shoots to the top of the standings ahead of Lawson.

Jake Hughes was fourth for Van Amersfoort Racing, after he was disqualified from Saturday’s Sprint Race.

The DAMS duo of Ayumu Iwasa and Roy Nissany were seventh and eighth respectively, with Jack Doohan ninth, taking the extra point on offer for the fastest lap.

Juri Vips rounded out the top 10 for Hitech Grand Prix.

Formula 2 will return next month for the third round of the season in Imola, where Formula 3 will also feature.