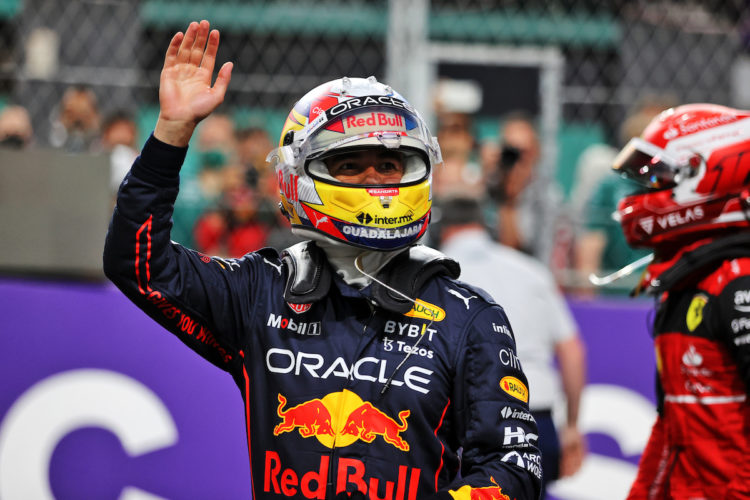 Sergio Perez claimed his maiden Formula 1 pole position at the 215th time of asking in a tumultuous qualifying session in Saudi Arabia.

The session ran for over two hours amid a lengthy delay due to Mick Schumacher’s accident, while Lewis Hamilton failed to make it out of Q1, and World Champion Max Verstappen struggled.

Perez had never before been on pole position in Formula 1 during a career that has stretched back over a decade, often renowned as a Sunday driver rather than a Saturday specialist.

It looked set to be a fight between the Ferrari drivers and Verstappen but the World Champion was never in the mix up front as he struggled to get his tyres in the right window.

An incident involving Verstappen was also noted by the stewards but has not yet been outlined.

Leclerc grabbed top spot from Sainz on his final Q3 push lap, which looked set to seal the deal, but both were usurped by Perez, who snatched pole by a mere 0.025s, for the first time in his career.

Verstappen was left in fourth place, behind Perez and the Ferrari drivers.

Schumacher lost control of his Haas VF-22 through Turn 11 and was pitched into a violent impact with the wall on the inside of the track.

The car bounced across the track, leading to Schumacher suffering a secondary impact, and he was swiftly tended to by medical crews.

Schumacher was taken to the circuit’s medical facility and no injuries were revealed but as a precaution he was transferred to the King Fahad Armed Forces Hospital for further checks.

Hamilton out in Q1

Hamilton suffered one of the worst qualifying results of his career as he lacked performance throughout and was eliminated in Q1.

It marked the first time that he was knocked out at such an early stage on pure pace alone – excluding accidents, mechanical issues or changeable weather – since 2009.

Hamilton was unable to string together a quick lap and finished seven-tenths of a second behind team-mate Russell in Q1, who was fourth in that session.

Esteban Ocon had a sizeable moment through Turn 11 but held onto the car and qualified a strong fifth as Alpine showed encouraging pace.

Fernando Alonso was seventh, with the Alpines split by Mercedes’ George Russell, leaving Valtteri Bottas, Pierre Gasly and Kevin Magnussen to round out the top 10.

Schumacher was officially 14th after his accident but his participation in the race has yet to be confirmed.

Aston Martin’s Lance Stroll was slowest of the 15 runners in Q2.

Joining Hamilton out in Q1 were Alexander Albon and Nico Hulkenberg, while Nicholas Latifi caused a red flag when he crashed.

Latifi lost the rear of the Williams on the entry to Turn 13 and suffered a double impact with the barriers, but he was able to extricate himself from the wreckage.

AlphaTauri’s Yuki Tsunoda was left at the rear of the field after being unable to set a lap time due to a suspected fuel-related issue.