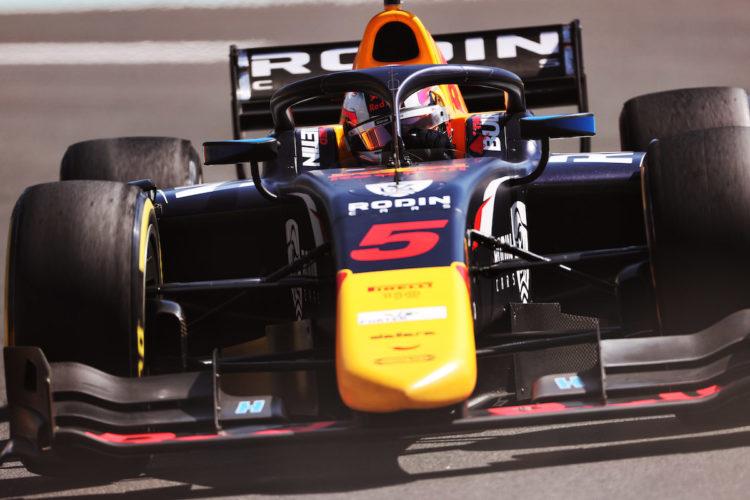 Liam Lawson took his first victory of the 2022 Formula 2 season in Jeddah, prevailing in the Sprint Race that was interrupted heavily by the Safety Car.

The opening lap of the race was clean, with Dennis Hauger retaining the lead of the race from reverse-grid pole position.

However, the Safety Car was called into action on the second lap when Amaury Cordeel crashed. The race restarted briefly on lap seven, but the Safety Car was brought back out immediately after Jack Doohan and Logan Sargeant collided at the back of the field.

The duo sped up to race pace before the leaders had done so, with Doohan hitting the rear of Sargeant, eliminating both from the race.

Race Control then informed teams that the cars should follow the Safety Car through the pit lane, before changing their mind and closing it.

However, leader Hauger didn’t receive the message and dropped to 12th place, before he was handed a 10-second stop/go penalty.

The race only resumed on lap 14, with Jake Hughes taking the lead from Calan Williams.

However, Hughes was unable to hold on until the chequered flag, as on lap 17, Lawson sped past and into the race-winning position.

Hughes also fell behind Juri Vips, with the Estonian taking second place at the end of the race on the run to the finish line. Felipe Drugovich was fourth.

Ralph Boschung was eighth, taking the final point on offer for Campos Racing.

Jehan Daruvala crossed the line in ninth, with Marino Sato rounded out the top 10.

Sunday’s Feature Race will round out Formula 2’s action in Jeddah. The race is scheduled to get underway at 16:35 local time.