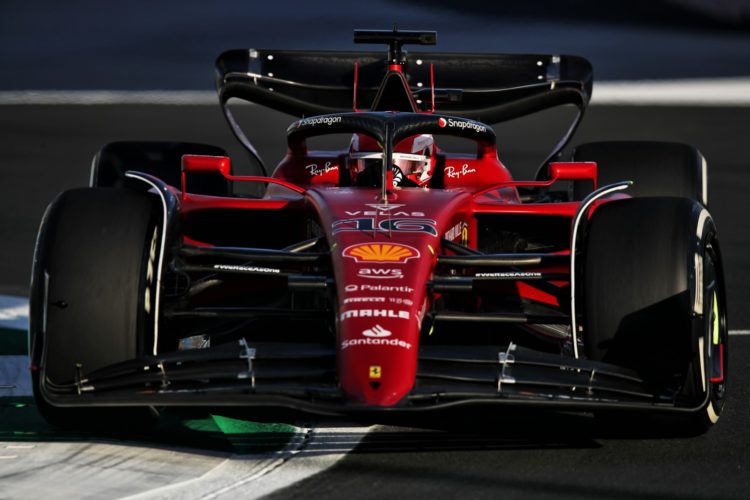 Charles Leclerc remained on top during second practice for Formula 1’s Saudi Arabian Grand Prix before both he and Ferrari team-mate Carlos Sainz hit the wall.

Several front-runners – including Verstappen – had their Soft tyre runs interrupted by a Virtual Safety Car period implemented when Haas’ Kevin Magnussen stopped due to a loss of power.

While Leclerc led the way on short runs he was unable to put in longer runs after clipping the inside wall on the entry to Turn 4.

Leclerc only glanced the wall but it was sufficient to cause damage to his Ferrari F1-75; he was able to limp back to the pits but took no further part in the session.

At almost the same time Ferrari team-mate Sainz ran wide through Turn 13, brushing the wall with the right-hand-side of the car, and he too returned to the pits and was out of the session.

Lando Norris provided some optimism for McLaren by finishing seventh, ahead of Alpine’s Esteban Ocon, while Alfa Romeo’s Valtteri Bottas and AlphaTauri’s Yuki Tsunoda rounded out the top 10.

Tsunoda was forced to halt his AlphaTauri AT03 in the first sector just as the chequered flag flew due to a mechanical issue.

The session itself was delayed by 15 minutes owing to incidents off-track.

The delay came following a major incident at a nearby Aramco-controlled facility earlier on Friday afternoon.

The Houthi rebel group, which has been fighting the Saudi-led coalition in Yemen, claimed responsibility for the attack, which led to a large fire and black smoke billowing across Jeddah.

Aramco, controlled by Saudi’s government, has been a Global Partner of Formula 1 since 2020, with its branding featuring prominently trackside.

It is also the title sponsor of the Aston Martin team and the US Grand Prix.

Drivers and senior figures were called to a meeting in the paddock by Formula 1 CEO Stefano Domenicali, with FIA President Mohammed Ben Sulayem also in attendance, in order to provide an update shortly before the scheduled start of the session.

A further meeting is due to take place later this evening.