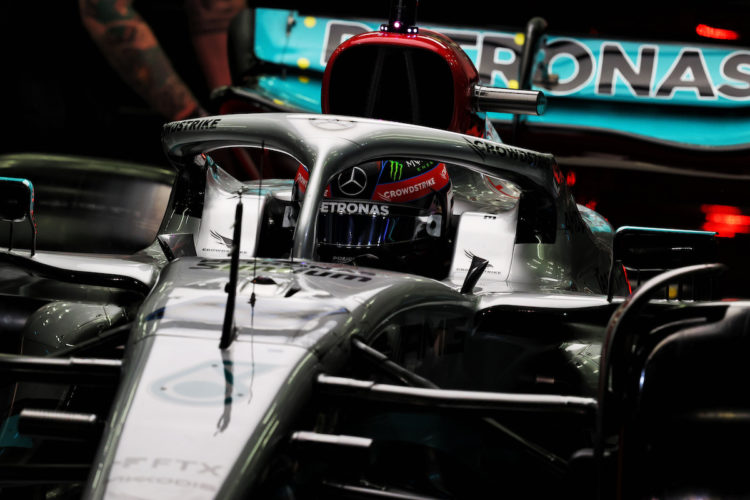 Mercedes’ lack of competitive pace at the Bahrain Grand Prix left it to treat the race like a test session, according to George Russell.

The Brackley-based squad was clear of the midfield pack, but was notably slower than front-runners Ferrari and Red Bull.

Despite its struggles, the team managed to capture a podium on Sunday with Lewis Hamilton in third place, while George Russell crossed the line in fourth.

Although it gained from Red Bull’s late double-retirement, Russell described the result as “extraordinary” for the team, who so far is unbeaten in the turbo-hybrid era in fights for the Constructors’ Championship.

“We got to take the positives,” Russell said. “I got a good start, made up two positions on lap one.

“I felt comfortable within the car. But we know where we’re at at the moment. To be honest, we probably didn’t get the balance quite right, but that’s not the main limitation.

“We’ve got this over-arching issue with the bouncing and I think to come away with a P3 and a P4 for the team is extraordinary.

“I know it wasn’t on pure pace, but this is a race car and everything has to work.”

With Mercedes still collecting information about the car to understand how to solve its problems, Russell says that the Bahrain race was handled like a test session.

“Before the race Toto and I had a little chat and he said, ‘look, this is a test session’,” Russell said.

“So I think we can be pleased to come home in P3 and P4 knowing that there’s a huge amount of performance there.

“But we got to be realistic and recognise we are a long way behind our rivals. We know there’s more to come, but they’re a real step ahead of us.”