Binder ‘couldn’t believe’ top ten run, ‘must have been doing something right’ 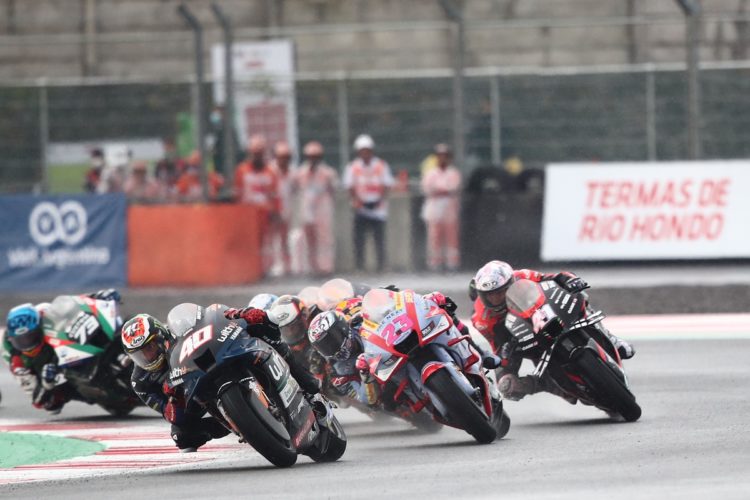 Darryn Binder says he “couldn’t believe” that he fought within the top ten in the Indonesian Grand Prix, the rookie taking a tenth place finish in only his second outing.

The RNF Racing man has faced criticism following his promotion directly from Moto3 to the premier class for this season having scored a sole win in the lightweight class across seven campaigns in the series, and also drew ire from some of his fellow riders for his aggressive racing style in the season opening Qatar Grand Prix.

Having qualified 23rd in the dry qualifying for the Indonesian GP, Binder charged through the field throughout a sodden Sunday encounter to run as high as eighth in the closing stages before ultimately being overcome by brother Brad on his KTM as well as Aprilia’s Aleix Espargaro.

The South African still scored his first ever top ten result in only his second ever premier class encounter, Binder labelling his performance as “quite the experience”  and that he “couldn’t believe” he was able to fight with some of MotoGP’s elite.

“It was quite the experience I can tell you that, those first couple of laps I couldn’t believe the kind of grip these tyres have in the rain,” explained Binder.

“I took a couple laps and was thinking ‘can I brake this strong’ and ‘can I open the throttle this hard’ but I kept feeling better and better, pushed more and more and started to make passes so after a while I could see I was starting to get into the points.

“I was really happy about this and then I could start to see my brother (Brad) and though that I could have a bit of a race with him, and I managed to pass them all but I felt like maybe I’d gone through too quickly and the last couple laps I was struggling.

“I had to fight for the position, but I’m so happy and at one point was telling myself ‘just make sure you finish, you’ve done a good race so don’t ruin it,’ so I am really happy to bring the bike home and am happy to have got some experience in the wet conditions, and am keen to keep working.

“It’s cool racing against these guys that you’ve seen in MotoGP for a long time and I couldn’t believe I was doing it, so I realised I must have been doing something right.”

Binder added that he wishes he “could have beaten” brother Brad having been ahead of with only a couple of tours remaining, though insisted he was keen to keep his feet on the ground and “start from the bottom” heading to Argentina in two weeks time.

“To race against Brad was cool, I wish I could have beaten him but he got the better of me today and I hope to beat him the next chance I get,” continued Binder.

“It’s always nice to have a good race as it motivates and charges you for the next one, but when we arrive in Argentina it will be a new circuit for me on the MotoGP bike so we have to step back and realise we have to start from the bottom and pull ourselves back up again so I’m going to enjoy this moment and get to Argentina fresh and hope it’s a good one.”