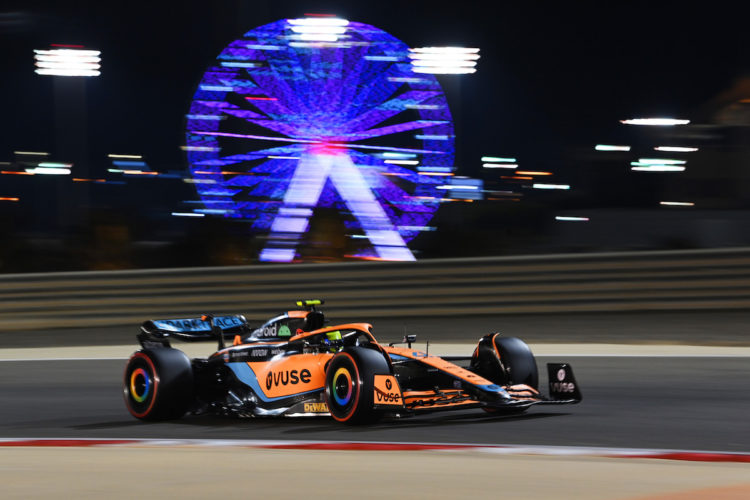 Lando Norris says that McLaren’s pace during qualifying for the Bahrain Grand Prix was “not a big shock” for the team.

Norris failed to progress into Q3 and was forced to settle for a 13th place starting position, while team-mate Daniel Ricciardo was eliminated in Q1.

McLaren endured a difficult pre-season test in Bahrain as it was forced to deal with a brake duct issue that halted it from completing long-runs.

However, its pace over a single lap was far from alarming, and it appeared to be one of the faster cars in the field at testing in Barcelona.

But after not reaching the top 10 on Saturday, Norris says that McLaren was anticipating the lack of pace ahead of the Bahrain weekend due to the track’s characteristics.

“Just the type of track, quite simply,” he said of the team’s struggles. “Maybe we just showed a bit more performance [at pre-season testing] than what we actually had.

“Or other people didn’t show as much as what they had. Other people have bought updates and so on.

“We have as well but maybe they’ve just bought bigger ones and better ones. Tough to say. A lot of it is track as well.

“The medium and high speed corners is where we’re performing a little bit better. It’s just more weaknesses here for us and we’re already learning where those strengths and weaknesses are.

“I don’t think it caught us out too much or we were too surprised. Of course people just looking at our lap time will be surprised from where we were in Barcelona to Bahrain, but not a big shock for us.

Ricciardo mirrored Norris’ comments, insisting that while the pace in qualifying was disappointing, it left him “not too surprised”.