by Phillip Horton
A A
7 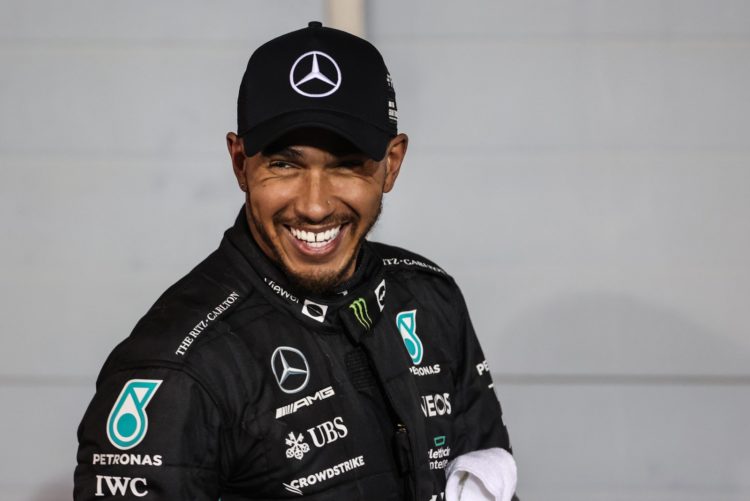 Lewis Hamilton says a podium at Formula 1’s Bahrain Grand Prix was beyond his and Mercedes’ expectations amid struggles with its W13.

Hamilton was set for a lonely fifth, ahead of team-mate George Russell, until both Red Bull drivers suffered suspected fuel systems issues.

That elevated Hamilton up to third place to ensure he began his 2022 campaign with a podium result.

“I had a moment where I thought for a second that I was going to have a little bit of a battle with Carlos [Sainz] but it was only for five laps and then after that they were gone,” said Hamilton.

“I definitely didn’t expect to be up here. Of course I woke up this morning and I was hopeful and we did everything we could, praying as hard as we could to get the best results, but ultimately it came down to just really hard work from the whole team both here and back at the factory.

“We have a lot of work to do. We have quite a big deficit in performance but this is a great start still.”

Hamilton praised Mercedes for its ongoing work in the aftermath of its result.

“I think incredibly motivating probably for the whole team,” he said. “Given that we have been faced with these challenges which we were not expecting, and but just no one’s been down during this phase where we’ve been struggling through practice.

“Everyone’s stayed positive, everyone’s just kept their head down and kept working. No one’s moaned.  And that’s great to see.

“And so whilst we don’t have the performance of these other guys, I think, in terms of our processes, in terms of squeezing absolutely everything out of the car, I think that’s what we did today and for both drivers, and I think that’s a true showing of strength within.”