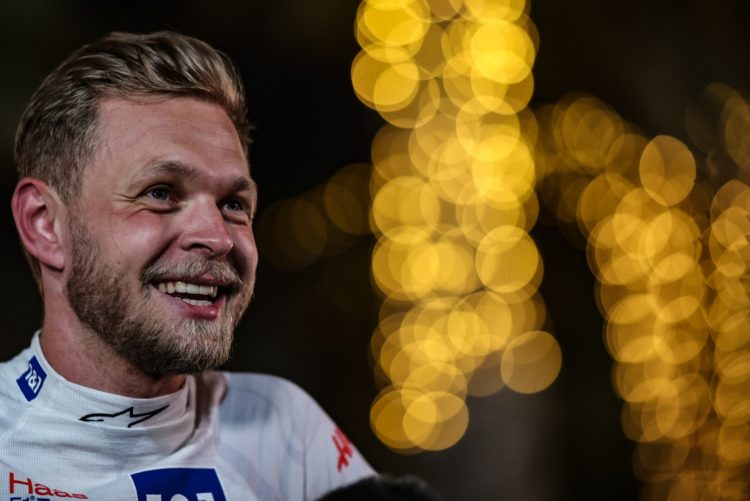 Kevin Magnussen was unable to conceal his delight after securing seventh on the grid for his Formula 1 comeback with Haas in Bahrain.

Magnussen was drafted in to replace Nikita Mazepin in order to reunite with a team that he previously raced for between 2017 and 2020.

Haas spent last year mired at the back, making Q2 only twice, as it poured its resources into its 2022 project.

The squad demonstrated its pace during testing in Bahrain, and maintained it through practice, before delivering an encouraging result in qualifying.

Magnussen made it through to Q3, despite battling a hydraulic issue, and set the seventh-best time.

“It’s crazy,” said Magnussen. “This is all we ever could’ve hoped for – I’m speechless.

“The last couple of weeks have been insane. Getting here, learning about the car, seeing that it is maybe a pretty good one and being so anxious about this qualifying to really see how it is and then finding out it is really good.

“I got through to Q3 on one set of tyres and in Q2 I only ran one set – I think I was P4 or something after the first run and ended up P7.

“Then we had some issue that needed more time to fix so we only got that one run again Q3 and still managed to get P7. It’s just so cool and I can’t wait to get started.”

Mick Schumacher expressed disappointment at failing to make Q3, having taken 12th, but outlined his encouragement at Haas’ potential.

“Q3 was definitely possible today and I’m gutted that I didn’t get there,” said Schumacher. “The good thing is that we know we have the potential and it’s just a matter of putting it together over the next 23 races.

“Points are realistic, we have a car to do that, it’s just a matter of putting everything together. We have a lot of races coming our way so I’m sure we’ll be in a position to do that.”