Hamilton ‘generally happy’ with fifth as rivals in ‘another league’ 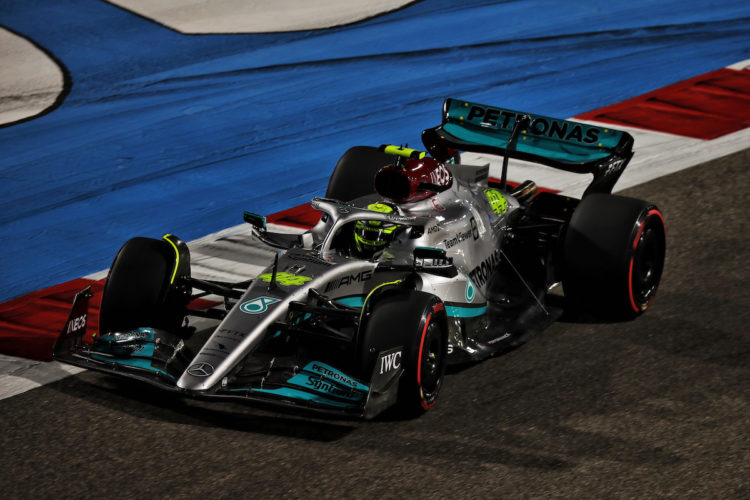 Lewis Hamilton says that he is “generally happy” with his fifth place qualifying position at the Bahrain Grand Prix.

The seven-time World Champion was almost seven-tenths of a second adrift from Ferrari’s Charles Leclerc, who claimed pole position for Sunday’s race.

Mercedes has struggled for the entire weekend in Bahrain, with Hamilton asserting after Friday practice that it was not in contention for the top positions.

Following qualifying, he says that rivals Ferrari and Red Bull are in “another league” after they took command of the first four spots on the starting grid.

“I’m generally really happy today,” Hamilton said. “Given how we’ve been the last few weeks, the struggles we’ve had and the problems we’ve had with the car, it’s a bit of a nightmare to drive.

“We’ve just kept our heads down, kept working away and I’m proud of everyone for just staying positive. Those guys ahead of us are in another league.

“So I’m generally happy with where we are. It’s not the front row, but we will make improvements and do the best we can tomorrow.”

Mercedes team boss Wolff was reluctant to pin Mercedes’ struggles on one area, but pointed out that the Brackley-based squad is suffering from drag more than other teams.

“It’s very difficult to make a judgement at this stage, we have the data that we’re running more drag than anybody else,” he said.

“You can see we’re losing on the main straight but not so much on the other ones.

“So we need to make an assessment after the first couple of races, are we lacking power deployment, before we point fingers into some of the areas.”