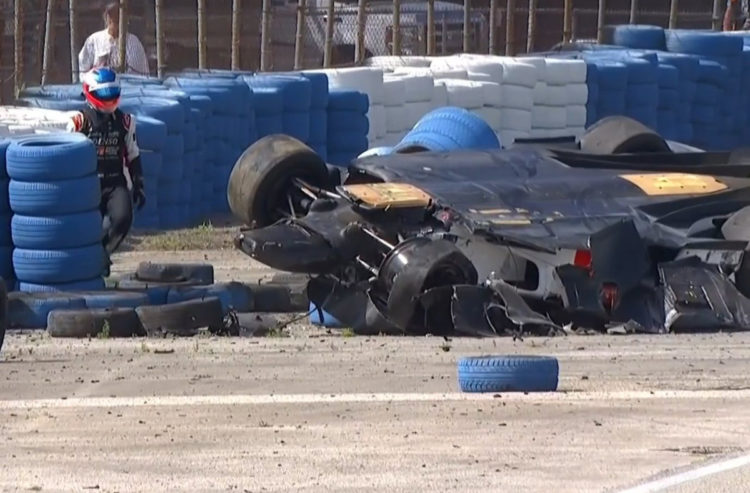 The 1000 Miles of Sebring has been red flagged due to a big crash for Toyota Gazoo Racing driver Jose Maria Lopez.

Lopez went straight on into the tyre barrier at turn 15 in the #7 Toyota GR010 Hybrid and flipped, but made it out of the car under his own power.

The Toyota has sustained damage earlier in the lap after spinning into the tyre barrier at turn 8 following contact with the #88 Dempsey-Proton Racing Porsche 911 RSR-19 of Julien Andlauer.

After the contact, Lopez appeared to have sustained front bodywork damage, as the car’s front end was smoking heavily when he shot straight on into the barriers for the second, much heavier impact.

The Argentinean was leading the race by the time of the initial contact with Andlauer, but team-mate Brendon Hartley has now inherited the lead in the #8 sister car.

Louis Deletraz leads LMP2 ahead of the United Autosports duo of Paul di Resta and Will Owen.

Paul Dalla Lana remains in the lead of the #98 NorthWest AMR Aston Martin Vantage AMR, ahead of TF Sport’s Ben Keating and Christian Ried in the #77 Dempsey-Proton Porsche.