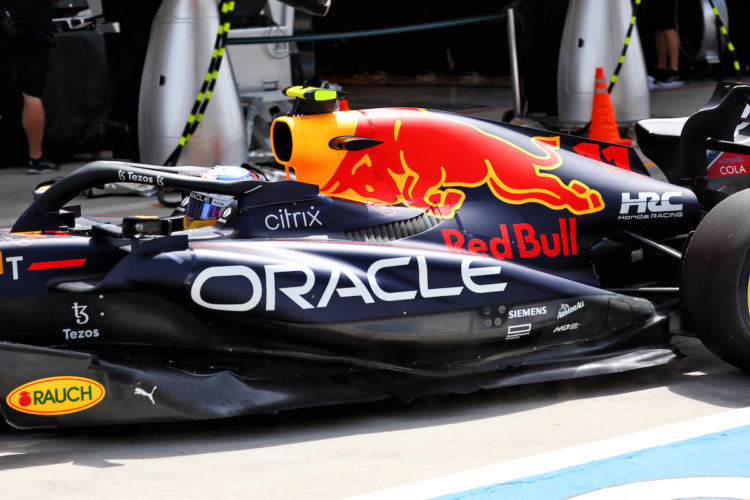 Red Bull has unveiled a new sidepod concept at the final day of testing in Bahrain, as well as an updated floor.

The Milton-Keynes based squad was expected to show off upgrades on Saturday, after Mercedes shocked the paddock with its vertical sidepod inlets on Thursday.

Mercedes’ design caused a stir, however Red Bull has asserted that it is happy that the car is operating within the technical regulations.

On Saturday, Red Bull revealed upgrades of its own in the form of new sculpted sidepods on the RB18 that feature a less aggressive undercut and larger air intakes, similar to the design produced by Ferrari.

A new floor is also being trialled on the car. Saturday’s morning on-track action for Red Bull was undertaken by Sergio Perez, however running has been limited in the opening two hours of the session.

Red Bull enters the year looking to defend its Drivers’ title, which it won last year with Max Verstappen.

The Dutchman will take over driving duties in the afternoon to round out the test ahead of next weekend’s opening round in Bahrain.

While an insight into the pecking order is difficult to judge after testing, Red Bull’s head of race engineering Guillaume Rocquelin stated after Friday’s running that the team had been “competitive without even trying”.

“It was more of a stop-start day today [Friday], mostly by design,” he said. “We had a good continuous run yesterday [Thursday], so today was more about exploring and testing different things.

“We spent more time in the garage making changes to the car and also taking more risks. We learned a lot and gathered a lot of information.

“I’m quite happy with what we found out, we are progressing in different directions and it’s all very positive. We were reasonably competitive at the end without even trying.”