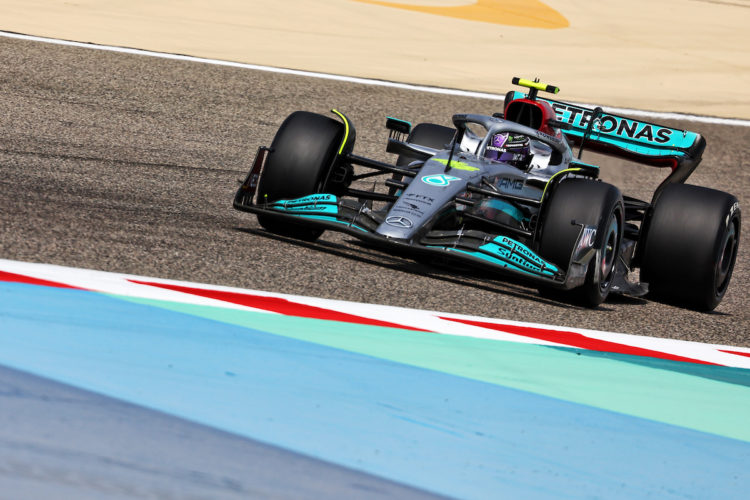 Lewis Hamilton believes that Mercedes is lacking compared to some of its rivals and doesn’t believe it is positioned at the head of the pecking order prior to the start of the 2022 Formula 1 season.

Mercedes has consistently been the strongest team in the turbo-hybrid era, taking eight consecutive Constructors’ Championships since 2014.

However, Hamilton has highlighted its struggles at Bahrain’s pre-season test ahead of next weekend’s season-opener.

“I’m sure everyone can figure it out, we’re not the quickest at the moment,” Hamilton said.

“Ferrari looks to be the quickest and perhaps Red Bull, and then maybe us or McLaren. I don’t know, but we’re certainly not at the top.”

Ferrari’s Carlos Sainz criticised Mercedes for downplaying its own pace, stating it is a tactic that it uses every season before turning up at the first race and having the fastest car.

However, Hamilton says that the issues that Mercedes has endured so far will not be solved before next week’s grand prix in Bahrain.

“I don’t think it’s going to look as it did last year with the difficult session we had in practice and then [the] switch over into the race,” he said.

“I think we have far bigger challenges this time and there not one-week turnarounds, they’ll take a little bit longer. But from what I told, we have a considerable amount of pace to find.”

Hamilton enters the year in search of his eighth F1 title, having missed out on a record-breaking championship last year to Max Verstappen.

The 37-year-old believes that while Mercedes doesn’t yet have the car to compete for race victories, he is confident that it can successfully develop the car during the year and make the necessary improvements.

“Obviously it’s a little bit too early to get into that, or have those kind of thoughts [of the title], but at the moment I don’t think we’ll be competing for wins,” he said.

“But there is potential within our car to get us there, we’ve just got to learn to extract it and fix some of the problems.

“That’s what we are working on and everyone is doing an incredible job back at the factory working as hard as they can, but we have some hurdles to overcome.

“Obviously next week we’ll get a much better showing of our pace but I think people will be surprised maybe.

“People keep saying that we keep talking ourselves down but it’s a bit different this year.”