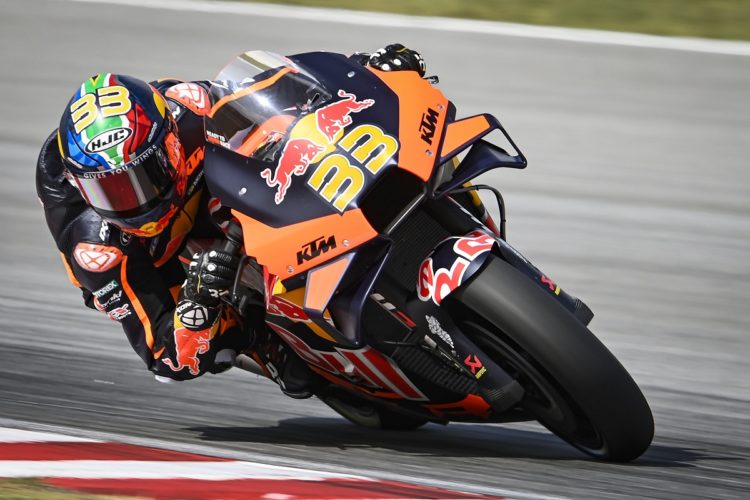 Brad Binder fired out the starting blocks early in Qatar as he led the opening MotoGP practice session for the Qatar Grand Prix at the Losail International Circuit.

The KTM rider floated around the top ten throughout the bulk of the 45-minute test, electing to save his best for the final seconds of the session as the 24 riders worked themselves back into the swing of things.

Suzuki looked to have control of proceedings with Alex Rins and 2020 MotoGP world champion Joan Mir sitting 1-2 with only a few minutes remaining, though Marc Marquez and LCR’s Takaaki Nakagami slotted in ahead of the GSX-RR pairing late on, the Japanese rider sitting on a 1:54.907s tour.

Binder though was going even faster on his penultimate flyer, the South African recording a 1:54.851s to takeover at the head of the field, his gambit ultimately remaining unbeaten as the chequered flag brought the session to an end.

Nakagami was therefore forced to make do with second ahead of Rins, who managed to get ahead of Marquez on his last flyer-the latter’s Honda team-mate Pol Espargaro also pipping the six-time premier class champion for fourth.

Franco Morbidelli was Yamaha’s highest representative in sixth just ahead of Mir, while Aleix Espargaro ended up eighth for Aprilia having led the session in the early stages.

Alex Marquez was ninth on the other LCR Honda, while Miguel Oliveira completed the top ten on the second factory KTM machine.

It was a rather quiet session for Ducati with Jorge Martin its highest classified rider in 12th, the sophomore racer just behind reigning MotoGP world champion Fabio Quartararo, while Jack Miller ended up as the quicker of the two factory Ducati men in 13th.

Francesco Bagnaia endured a tricky start to the 2022 season with only 18th on the timesheets having crashed at Turn 6 late on, the 2021 vice-champion losing the front of his Desmosedici on entry to the bend and thus losing the chance to improve his effort.

Remy Gardner was the fastest rookie in 19th for the Tech 3 KTM squad, while fellow newcomer Fabio Di Gianantonio ran into difficulties when he crashed his Gresini Ducati at Turn 3 with a third of the session remaining.

It was a tricky start also for the two new outfits joining the championship for this year, RNF Yamaha’s Andrea Dovizioso only 16th with team-mate Darryn Binder 23rd having had to pit early on with the fairing of his M1 hanging loose-while VR46 men Luca Marini and Marco Bezzecchi completed the session 19th and 24th respectively.