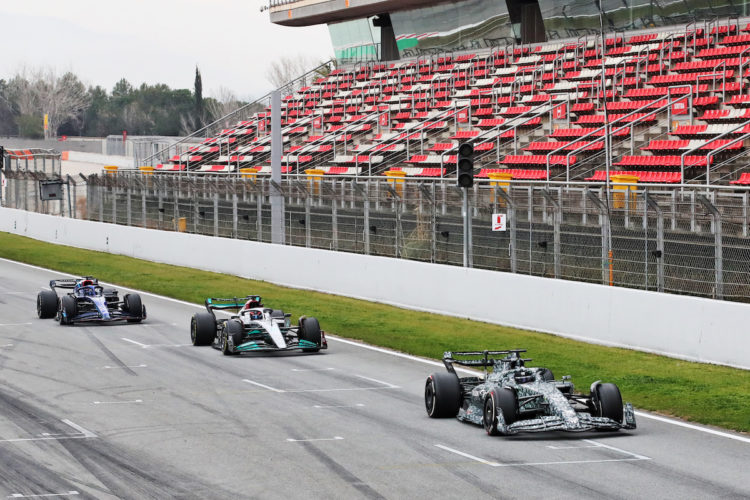 George Russell has admitted concern after noticing a “substantially” reduced slipstream effect during the pre-season shakedown in Barcelona.

This year, Formula 1 is operating under a new set of technical regulations, which aim to allow for closer racing on the track.

In recent seasons, following a rival car through corners has been a difficult task due to the high levels of dirty air produced by the car’s downforce.

However, the aerodynamic complexity also meant the slipstream effect was strong down straights, allowing for much higher top speeds to the car behind compared to the car ahead due to the lack of air resistance.

Russell, who has joined Mercedes for the 2022 F1 season, says he trialled the slipstream behind McLaren’s Lando Norris during the Barcelona test and wasn’t encouraged by the results.

“I think the following has been improved but the slipstream effect has been reduced quite substantially,” Russell said.

“You obviously need that delta in the straights to overtake because you can only overtake at the end of a straight and into a corner.

“We can follow closer but from what we have seen, the slipstream effect is definitely less effective. We will have to wait and see.

“I got right up behind Lando, I was a car-length or two behind him and didn’t catch the straight, so that was slightly concerning so let’s see.”

While Norris agreed that the slipstream effect has been reduced, the Briton reserved judgement over how it will impact racing this season.

“George said it correctly, the following in the corner is an improvement,” he commented.

“How much exactly is hard to know because you are always on different fuel levels and tyres and maybe when there are three, four, five, six cars ahead then it could be quite different again.

“But with all this obviously comes the deficit of a slipstream effect and how much that is going to be helping us.

“We can follow closer but then the slipstream is worse so a positive and a negative from it.

“We don’t know which is the bigger effect at the minute so we will have to see until the first race.”